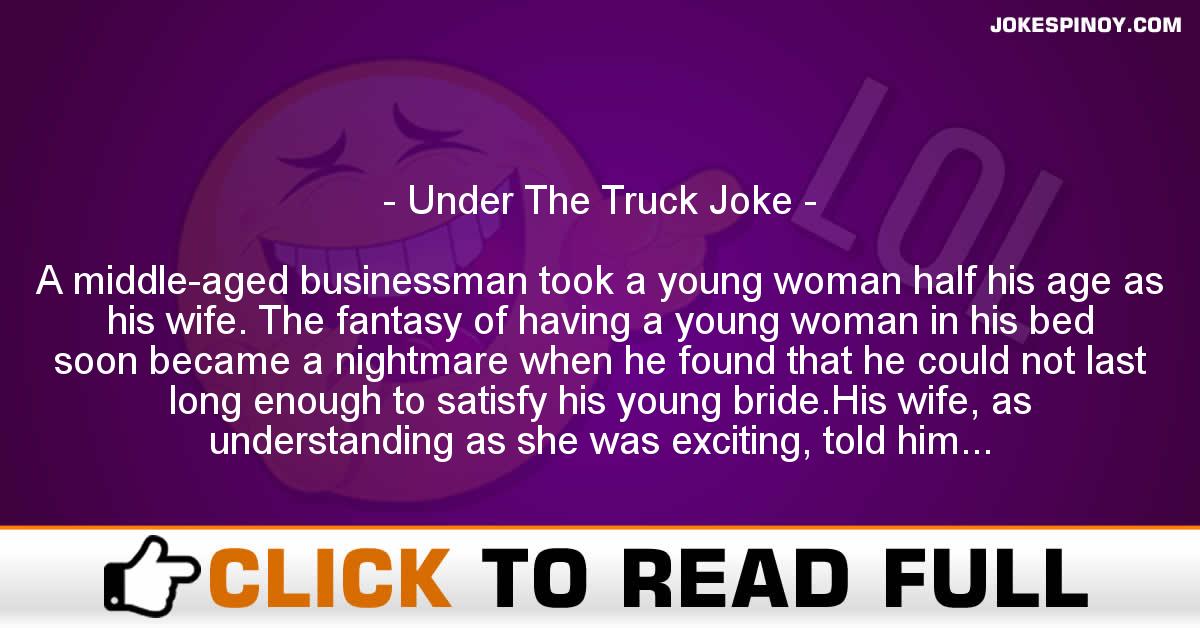 A middle-aged businessman took a young woman half his age as his wife. The fantasy of having a young woman in his bed soon became a nightmare when he found that he could not last long enough to satisfy his young bride.His wife, as understanding as she was exciting, told him that all was well even if he was quick to get out of the saddle.Determined to satisfy this sweet young thing, the man visited the doctor to get some advice.”Doctor, I can’t seem to hold back for very long when I make love to my young wife and I can’t satisfy her. What can I do?”The doctor smiled, patted him on the shoulder, and said in a professional manner, “Try a bit of self-stimulation before having intercourse with your wife and you’ll find that you’ll last longer and ultimately satisfy her.””Okay, Doctor. If you think that will help.”Later that afternoon, his young bride called him at work to let him know that she would be attacking him at the front door when he arrived home.”Be prepared, my darling. I’m going to ravish you,” she cooed over the phone.Undaunted, the man decided to follow the doctor’s advice. But where? In the office? The Xerox room? What if someone walked in on him?He got in his truck and began the journey home. Soon he decided he would find a spot on the road to pull over, climb underneath the truck and pretend to be inspecting the rear axle, and do the deed there.A moment later, he pulled over, crawled beneath the truck, closed his eyes tightly, fantasized about his young wife, and began his “therapy”.A few minutes later, just as he was about to complete his therapy session, he felt someone tugging on his pants leg. Keeping his eyes tightly shut to avoid ruining the fantasy he was enjoying, he said, “Yes?””Sir, I’m with the Police Department. Could you tell me what you are doing, please?” said the officer.”Yes, officer, I’m inspecting my truck’s rear axle,” he replied confidently.”Well, why don’t you check the brakes while you’re down there.Your truck rolled down the hill a few minutes ago.”