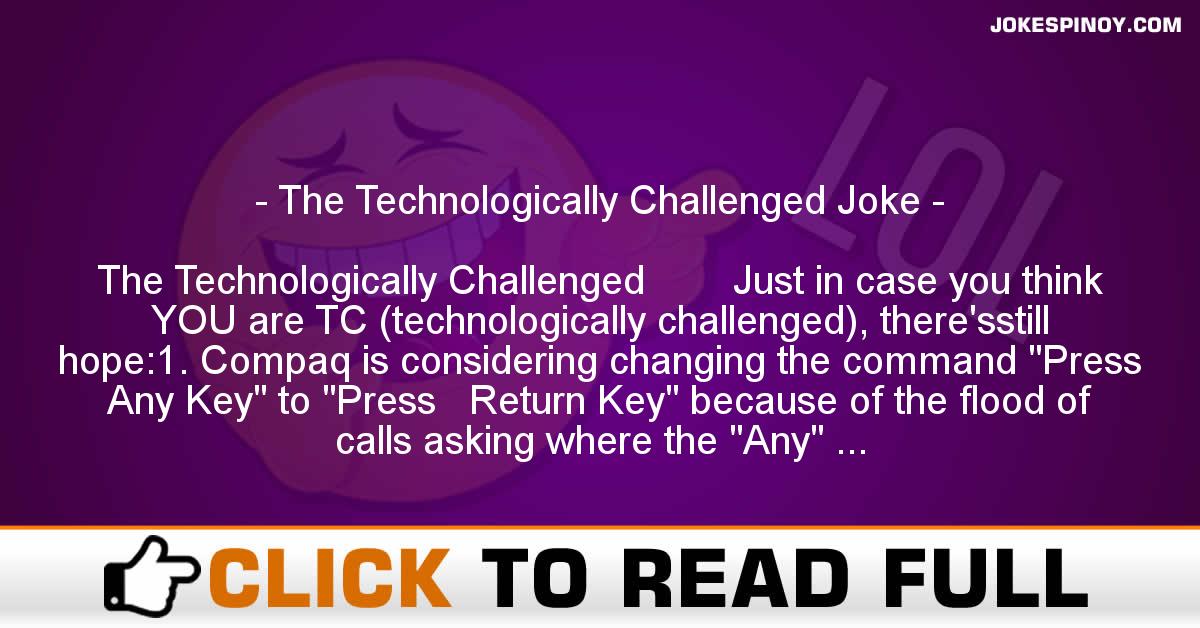 The Technologically Challenged Just in case you think YOU are TC (technologically challenged), there’sstill hope:1. Compaq is considering changing the command “Press Any Key” to “Press Return Key” because of the flood of calls asking where the “Any” key is.2. AST technical support had a caller complaining that her mouse was hard to control with the dust cover on. The cover turned out to be the plastic bag the mouse was packaged in.3. Another Compaq technician received a call from a man complaining that the system wouldn’t read word processing files from his old (5-1/4″) diskettes. After troubleshooting for magnets and heat failed to diagnose the problem, it was found that the customer had labeled the diskettes, then rolled them into the typewriter to type the labels.4. Another AST customer was asked to send a copy of her defective diskettes. A few days later a letter arrived from the customer along with photocopies of the floppies.5. A Dell technician advised his customer to put his troubled floppy back in the drive and close the door. The customer asked the tech to hold on, and was heard putting the phone down, getting up and going across the room to close the door.6. Another Dell customer called to say he couldn’t get his computer to fax anything. After 40 minutes of troubleshooting, the technician discovered the man was trying to fax a piece of paper by holding it in front of the monitor screen and hitting the “send” key.7. Yet another Dell customer called to complain that his keyboard no longer worked. He had cleaned it by filling up his tub with soap and water and soaking the keyboard for a day, then removing all the keys and washing them individually.8. A Dell technician received a call from a customer who was enraged because his computer had told him he was “bad and an invalid”. The tech explained that the computer’s “bad command” and “invalid” responses shouldn’t be taken personally.9. A confused caller to IBM was having troubles printing documents. He told the technician that the computer had said it “couldn’t find printer.” The user had even tried turning the computer screen to face the printer – but his computer still couldn’t “see” the printer.10.An exasperated caller to Dell Computer Tech Support couldn’t get her new Dell Computer to turn on. After ensuring the computer was plugged in, the technician asked her what happened when she pushed the power button. Her response, “I pushed and pushed on this foot pedal and nothing happened.” The “foot pedal” turned out to be the mouse!11.Another customer called Compaq tech support to say her brand-new computer wouldn’t work. She said she unpacked the unit, plugged it in and sat there for 20 minutes waiting for something to happen. When asked what happened when she pressed the power switch, she asked “What power switch?”12.True story from a Novell NetWire SysOp: Caller: “Hello, is this Tech Support?” Tech: “Yes, it is. How may I help you?” Caller: “The cup holder on my PC is broken and I am within my warranty period. How do I go about getting that fixed?” Tech: “I’m sorry, but did you say a cup holder?” Caller: “Yes, it’s attached to the front of my computer.” Tech: “Please excuse me if I seem a bit stumped, it’s because I am. Did you receive this as part of a promotion, at a trade show? How did you get this cup holder? Does it have any trademark on it?” Caller: “It came with my computer, I don’t know anything about a promotion. It just has ‘4X’ on it.” At this point the Tech Rep had to mute the caller, because he couldn’t stand it. He was laughing too hard. The caller had been using the load drawer of the CD-ROM drive as a cup holder, and snapped it off the drive.13.Another IBM customer had troubles installing software and rang for support. “I put in the first disk, and that was OK. It said to put in the second disk, and I had some problems with the disk, but I squeezed it in. When it said to put in the third disk – I couldn’t even fit it in…” The user hadn’t realized that “Insert Disk 2” meant to remove Disk 1 first.