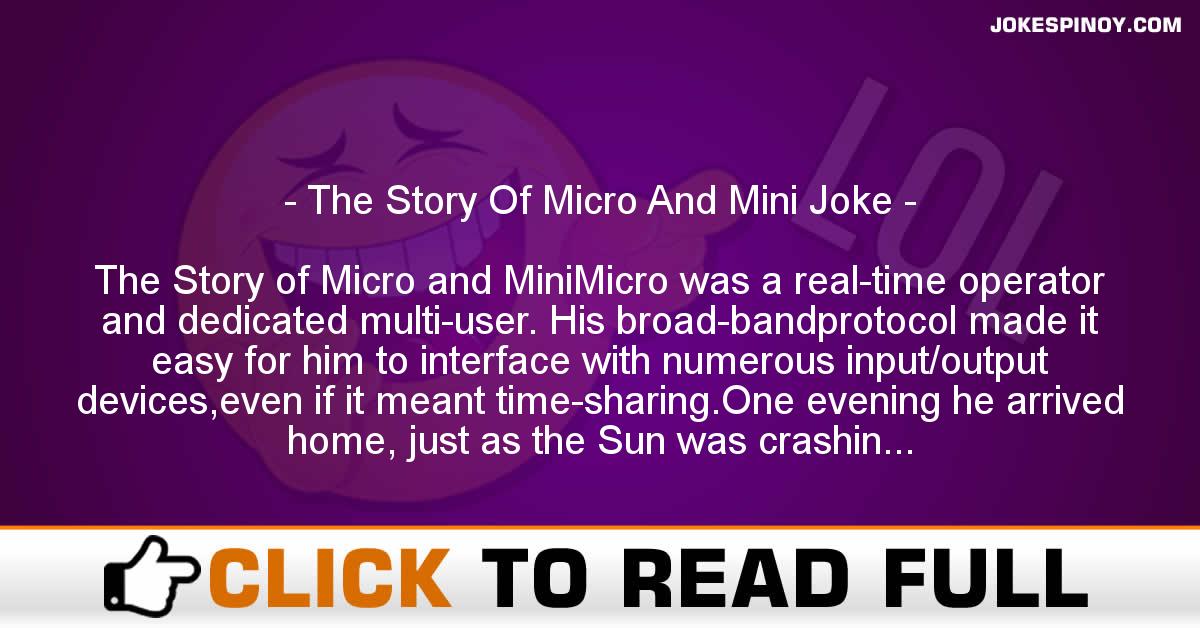 The Story of Micro and MiniMicro was a real-time operator and dedicated multi-user. His broad-bandprotocol made it easy for him to interface with numerous input/output devices,even if it meant time-sharing.One evening he arrived home, just as the Sun was crashing and had parked hisMotorola 6800 in the main drive (he missed the 5100 bus that morning ), whenhe noticed an elegant piece of hardware escorting her daisy wheels in hisgarden. He thought to himself, “She looks user-friendly,” “I’ll see if she’dlike an update tonight.”Mini was her name, and she was delightfull, engineered with eyes like COBOL anda Prime mainframe architecture that set Micro’s peripherals networking all overthe place.He browsed over to her casually, admiring the power of her twin 32 bit floatingpoint processors and inquired “How are you Honey Well?.” “Yes I am well,” sheresponded, batting her optical fibres engagingly and smoothing her console overher curvilinear functions.Micro settled for a straight line approximation. “I’m stand-alone tonight,” hesaid, “How about computing a vector to my base address?” “I will cut out a byteto eat, and maybe we could get an offset later on.”Mini ran a priority process for 2.6 milliseconds then transmitted OK. “I’vebeen dumped myself recently, and a new page is just what I need to refresh mydisks. I’ll park my machine cycle in your background and meet you inside. Shewalked off, leaving Micro admiring her solenoids and thinking, “Wow, what aglobal variable, I wonder if she’d like my firmware?.”They sat down at the process table to a top of form feed of fiche and chips anda bucket of bawdots. Mini was in conversational mode and expanded on ambiguousarguments while Micro gave occasional acknowlegments, although, in reality, hewas analyzing the shortest and least critical path to her entry point. Hefinally settled on the old “would you like to see my benchmark subroutine?” butMini was again one step ahead.Suddenly she was up and stripping off her parity bits to reveal the fullfunctionality of her operating software. “Let’s get Basic, you RAM,” she said.Micro was loaded by this stage, but his hardware polling module had a processorof it’s own and was in danger of overflowing its output buffer (a hang-up thatMicro had consulted his analyst about). “Core,” was all he could say, as sheprepared to log him off.Micro soon recovered, however, when he went down on the DEC and opened herdevice files to reveal her data set ready. He accessed his fully packed rootdevice and was about to start pushing her CPU stack, when she attempted anescape sequence ….”No, No” she cried, “You are not shielded.””Reset, Baby,” he replied, “I’ve been debugged.””But I haven’t got my current loop enabled, and I can’t support childprocesses,” she protested.”Don’t run away,” he said, “I will generate an interrupt.””No that’s too error prone, and I can’t abort because of my design philosophy.”Micro was locked in by this stage though, and could not be turned off. But Minisoon stopped his thrashing by introducing a voltage spike into his main supply,whereupon he fell over with a head crash and went to sleep.”Computers,” She thought as she compiled herself, “All they ever think of isHEX.”