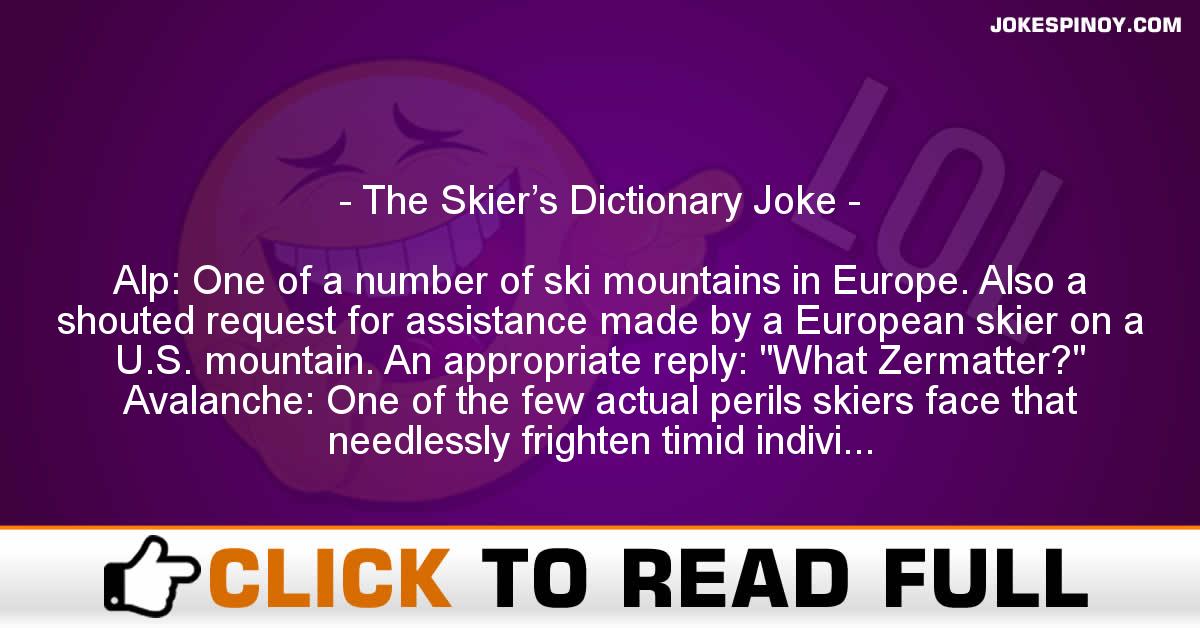 Alp: One of a number of ski mountains in Europe. Also a shouted request for assistance made by a European skier on a U.S. mountain. An appropriate reply: “What Zermatter?” Avalanche: One of the few actual perils skiers face that needlessly frighten timid individuals away from the sport. See also: Blizzard, Fracture, Frostbite, Hypothermia, Lift Collapse. Bindings: Automatic mechanisms that protect skiers from potentially serious injury during a fall by releasing skis from boots, sending the skis skittering across the slope where they trip two other skiers, and so on and on, eventually causing the entire slope to be protected from serious injury. Bones: There are 206 in the human body. No need for dismay, however: TWO bones of the middle ear have never been broken in a skiing accident. Cross-Country Skiing: Traditional Scandinavian all-terrain snow-travelling technique. It’s good exercise. It doesn’t require the purchase of costly lift tickets. It has no crowds or lines. It isn’t skiing. See Cross-Country Something-Or-Other. Cross-Country Something-or-Other: Touring on skis along trails in scenic wilderness, gliding through snow-hushed woods far from the hubbub of the ski slopes, hearing nothing but the whispery hiss of the skis slipping through snow and the muffled tinkle of car keys dropping into the puffy powder of a deep, wind-sculped drift. Exercises: A few simple warm-ups to make sure you’re prepared for the slopes: *Tie a cinder block to each foot with old belts and climb a flight of stairs. *Sit on the outside of a second-story window ledge with your skis on and your poles in your lap for 30 minutes. *Bind your legs together at the ankles, lie flat on the floor; then, holding a banana in each hand, get to your feet. Gloves: Designed to be tight enough around the wrist to restrict circulation, but not so closefitting as to allow any manual dexterity; they should also admit moisture from the outside without permitting any dampness within to escape. Gravity: One of four fundamental forces in nature that affect skiers. The other three are the strong force, which makes bindings jam; the weak force, which makes ankles give way on turns; and electromagnetism, which produces dead batteries in expensive ski-resort parking lots. See Inertia. Inertia: Tendency of a skier’s body to resist changes in direction or speed due to the action of Newton’s First Law of Motion. Goes along with these other physical laws: * Two objects of greatly different mass falling side by side will have the same rate of descent, but the lighter one will have larger hospital bills. * Matter can neither be created nor destroyed, but if it drops out of a parka pocket, don’t expect to encounter it again in our universe. * When an irrestible force meets an immovable object, an unethical lawyer will immediately appear. Prejump: Manuever in which an expert skier makes a controlled jump just ahead of a bump. Beginners can execute a controlled prefall just before losing their balance and, if they wish, can precede it with a prescream and a few pregroans. Shin: The bruised area on the front of the leg that runs from the point where the ache from the wrenched knee ends to where the soreness from the strained ankle begins. Ski! : A shout to alert people ahead that a loose ski is coming down the hill. Another warning skiers should be familiar with is “Avalanche!” – which tells everyone that a hill is coming down the hill. Skier: One who pays an arm and a leg for the opportunity to break them. Stance: Your knees should be flexed, but shaking slightly; your arms straight and covered with a good layer of goose flesh; your hands forward, palms clammy, knuckles white and fingers icy, your eyes a little crossed and darting in all directions. Your lips should be quivering, and you should be mumbling, “Why?” Thor: The Scandinavian god of acheth and painth. Traverse: To ski across a slope at an angle; one of two quick and simple methods of reducing speed. Tree: The other method.