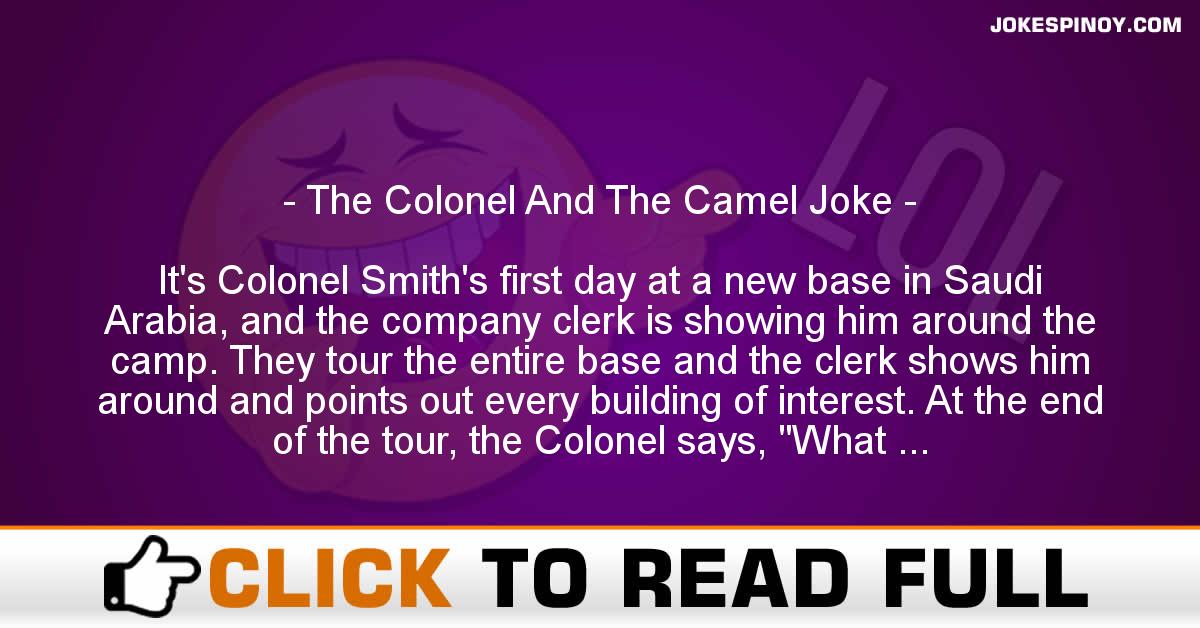 It’s Colonel Smith’s first day at a new base in Saudi Arabia, and the company clerk is showing him around the camp. They tour the entire base and the clerk shows him around and points out every building of interest. At the end of the tour, the Colonel says, “What about that little stable over there? What’s that for?””Well,” says the clerk, and looks at the ground in embara*sment, “you may have noticed there aren’t any women on the base. You see, we keep a camel in that there stable, so that when the men get their urges they can –“The Colonel holds up his hand, shakes his head and cuts off the clerk midsentence. “PLEASE! Say no more. I get the point.”Well, as you can imagine, after a few weeks on the base the Colonel too felt the need for a woman, and so he found himself at the clerk’s desk one Saturday afternoon. “Tell me,” the Colonel said in a whisper, looking over his shoulder to be sure no one else could hear, “is the camel free this afternoon?”The clerk checks his appointment book and nods in the affirmative. “How about I schedule you in for 2:00?”The Colonel nods and walks away. At 2:00 he makes his way to the stable, walks in, and gently closes the door behind him. He finds a small stepping stool nearby, moves it behind the camel, and climbs onto it. Then he lowers his trousers, and begins, well, making love to the camel.Just as he’s nearing his peak, the door opens suddenly and the Colonel spins around in shock and embarra*sment to see the clerk standing there with a big grin on his face. As the Colonel begins to yell for him to leave, the clerk interrupts him with a quizzical look on his face.”Begging your pardon, sir, but wouldn’t it have been simpler for you to just ride the camel into town to find a woman, like the other men do?”