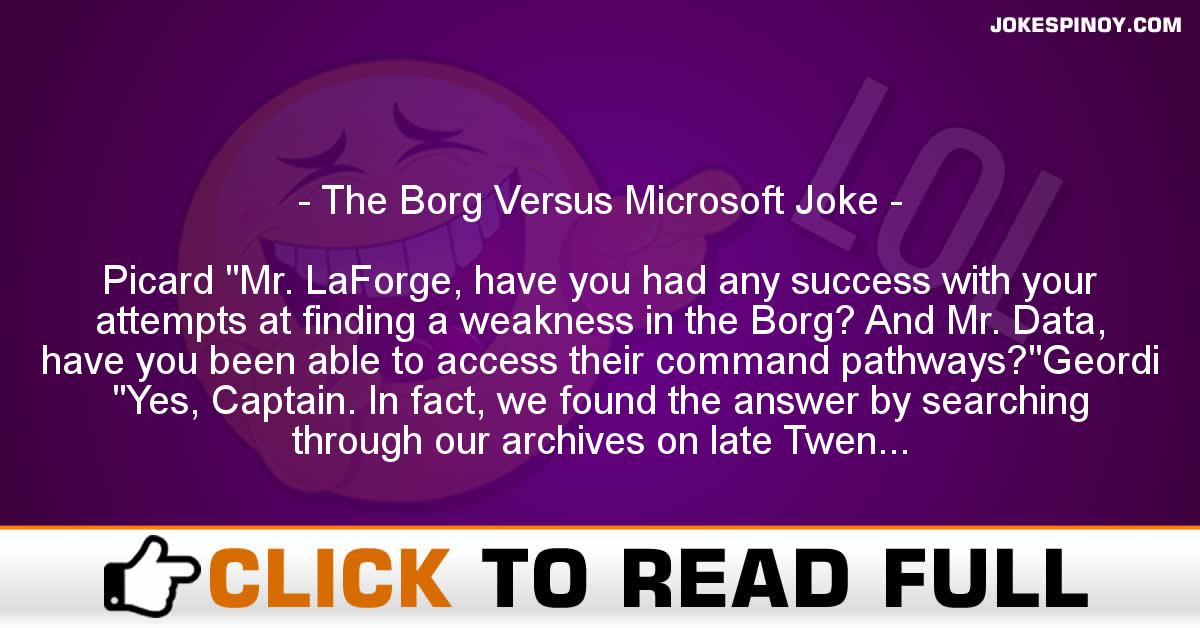 Picard “Mr. LaForge, have you had any success with your attempts at finding a weakness in the Borg? And Mr. Data, have you been able to access their command pathways?”Geordi “Yes, Captain. In fact, we found the answer by searching through our archives on late Twentieth-century computing technology.”Geordi presses a key, and a logo appears on the computer screen.Riker looks puzzled. “What in the world is ‘Microsoft’?”Data turns to answer. “Allow me to explain. We will send this program, for some reason called ‘Windows’, through the Borg command pathways. Once inside their root command unit, it will begin consuming system resources at an unstoppable rate.”Picard “But the Borg have the ability to adapt. Won’t they alter their processing systems to increase their storage capacity?”Data “Yes, Captain. But when ‘Windows’ detects this, it creates a new version of itself known as an ‘upgrade’. The use of resources increases exponentially with each iteration. The Borg will not be able to adapt quickly enough. Eventually all of their processing ability will be taken over and none will be available for their normal operational functions.”Picard “Excellent work. This is even better than that ‘unsolvable geometric shape’ idea.”Fifteen minutes later . . .Data “Captain, We have successfully installed the ‘Windows’ in the command unit and as expected it immediately consumed 85% of all resources. We however have not received any confirmation of the expected ‘upgrade’.”Geordi “Our scanners have picked up an increase in Borg storage and CPU capacity to compensate, but we still have no indication of an ‘upgrade’ to compensate for their increase.”Picard “Data, scan the history banks again and determine if their is something we have missed.”Data “Sir, I believe their is a reason for the failure in the ‘upgrade’. Apparently, the Borg have circumvented that part of the plan by not sending in their registration cards.Riker “Captain we have no choice. Requesting permission to begin emergency escape sequence 3F . . .”Geordi, excited “Wait, Captain I just detected their CPU capacity has suddenly dropped to 0% !”Picard “Data, what do your scanners show?”Data “Apparently the Borg have found the internal ‘Windows’ module named ‘Solitaire’ and it has used up all the CPU capacity.”Picard “Lets wait and see how long this ‘solitaire’ can reduce their functionality.”Two hours pa*s . . .Riker “Geordi what’s the status on the Borg?”Geordi “As expected, the Borg are attempting to re-engineer to compensate for increased CPU and storage demands, but each time they successfully increase resources I have set up, our closest deep space monitor beacon to transmit more ‘Windows’ modules from something called the ‘Microsoft fun-pack’.Picard “How much time will that buy us ?”Data “Current Borg solution rates allow me to predicate an interest time span of 6 more hours.”Geordi “Captain, another vessel has entered our sector.”Picard “Identify.”Data “It appears to have markings very similar to the ‘Microsoft’ logo”Over the speakers:”THIS IS ADMIRAL BILL GATES OF THE MICROSOFT FLAGSHIP MONOPOLY. WE HAVE POSITIVE CONFIRMATION OF UNREGISTERED SOFTWARE IN THIS SECTOR. SURRENDER ALL A*SETS AND WE CAN AVOID ANY TROUBLE. YOU HAVE 10 SECONDS”Data “The alien ship has just opened its forward hatches and released thousands of humanoid shaped objects.”Picard “Magnify forward viewer on the alien craft”Riker “Good God captain! Those are humans floating straight toward the Borg ship with no life support suits ! How can they survive the tortures of deep space ?!”Data “I don’t believe that those are humans sir, if you will look closer, I believe you will see that they are carrying something recognized by twenty-first century man as doe skin leather briefcases, and wearing Armani suits”Riker and Picard together horrified “Lawyers !!”Geordi “It can’t be. All the lawyers were rounded up and sent hurtling into the sun in 2017 during the Great Awakening.”Data “True, but apparently some must have survived.”Riker “They have surrounded the Borg ship and are covering it with all types of papers.”Data “I believe that is known in ancient vernacular as ‘red tape’. I understand that it often proves fatal.”Riker “They’re tearing the Borg to pieces !”Picard “Turn off the monitors. I can’t stand to watch, not even the Borg deserve that!”