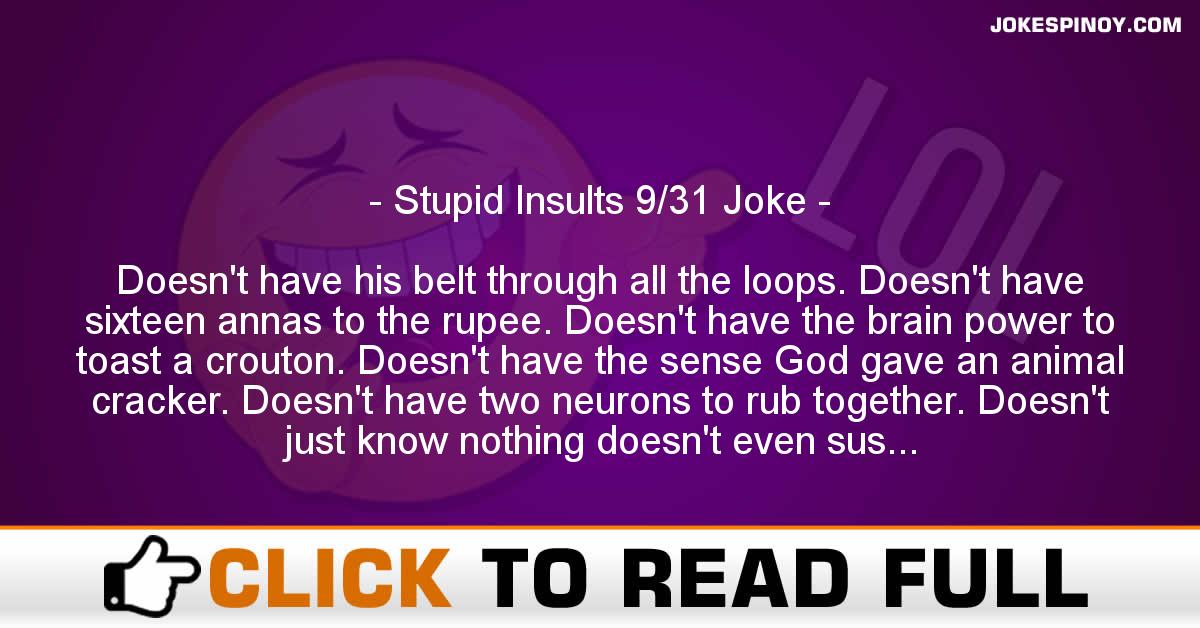 Doesn’t have his belt through all the loops. Doesn’t have sixteen annas to the rupee. Doesn’t have the brain power to toast a crouton. Doesn’t have the sense God gave an animal cracker. Doesn’t have two neurons to rub together. Doesn’t just know nothing doesn’t even suspect much. Doesn’t know much, but leads the league in nostril hair. — Billing Doesn’t know which side the toast is buttered on. Doesn’t put the cross-hairs on the target. Doesn’t quite sample at the Nyquist rate. Doesn’t suffer from ear pressure when flying at altitude. Donated her body to scientists… Before she was done using it. Downhill skiing in Iowa. Driveway doesn’t quite reach the garage. Driving at night with the lights off. Driving with two wheels in the sand. Dropped his second stage too soon. Dumb as asphalt / dirt / a mud fence / a stump / a sack of hammers. Dumber than a chicken / box of hair/rocks. During evolution his ancestors were in the control group. Ears are redirected to /dev/null. Easier to count the bricks left than the bricks missing. Echoes between the ears. Eight pawns short of a gambit. Elevator doesn’t go all the way to the top floor / penthouse. Elevator goes all the way to the top but the door doesn’t open. Elevator is on the ground floor and he’s pushing the Down button. End of season sale at the cerebral department. — Gareth Blackstock Enjoys listening to telemarketers. Enough sawdust between the ears to bed an elephant.