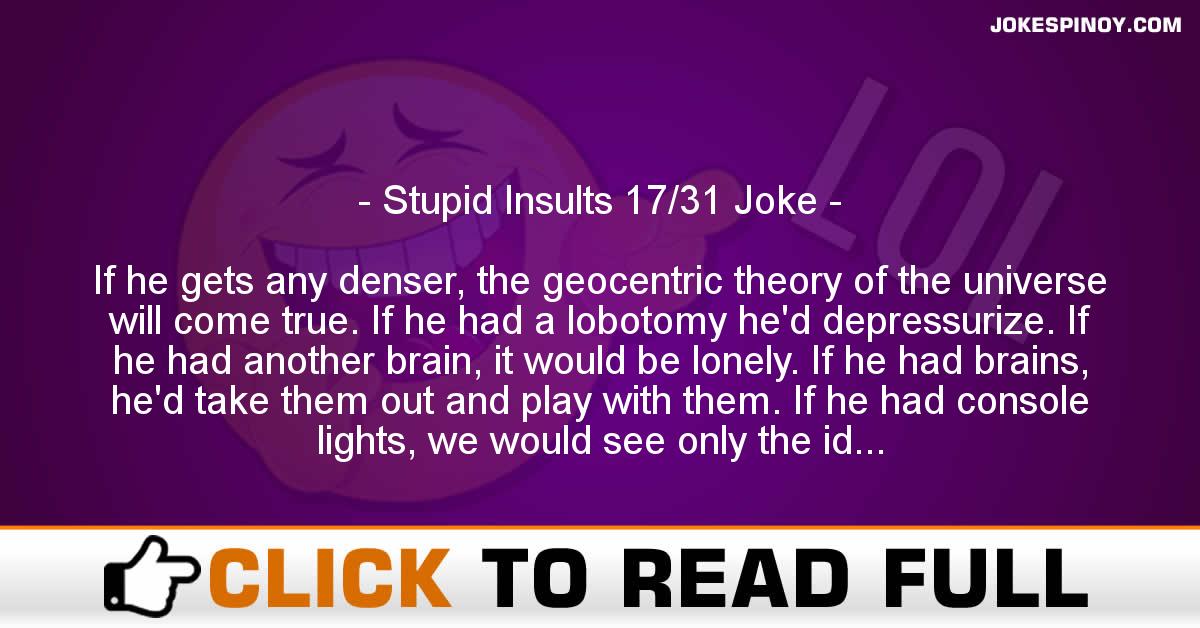 If he gets any denser, the geocentric theory of the universe will come true. If he had a lobotomy he’d depressurize. If he had another brain, it would be lonely. If he had brains, he’d take them out and play with them. If he had console lights, we would see only the idle loop patterns. If he were any brighter he’d be in the visible spectrum. If he were any more stupid, he’d have to be watered twice a week. If her brains were put in a hummingbird, it would fly backwards. If his brain were a hard drive, it would back up on a single floppy. If his brains were money, he’d still be in debt. If his IQ was two points higher he’d be a rock. If ignorance were bliss, she’d be orgasmic. If it’s not in his horoscope/tea leaves, he doesn’t take it seriously. If she had a disk we could upgrade her with DOS 3.0. If she was any dumber, she’d be a green plant. If stupidity were a crime, he’d be number one on the Most Wanted list. If the government ever declared war on stupidity, he’d get nuked. If there were a merciful God he’d be dead by now. If they each had half a brain, they’d still only have half a brain. If they knock heads, implosion will suck all the air out of the room. If what you don’t know can’t hurt you, she’s practically invulnerable. If you called him a wit, you’d be half right. If you give him a penny for his thoughts, you get change back. If you stand close enough to him, you can hear the ocean. Ignorant, and proud of it. Immune from any serious head injury. Immune to caffeine and all other stimulants. In a tub of Preparation H, he’d shrink down to thumb size. In his optimum environment, he’d be locked in a life and death struggle with mushrooms. In line for brains, thought they said pains, and said, “No, thanks”.