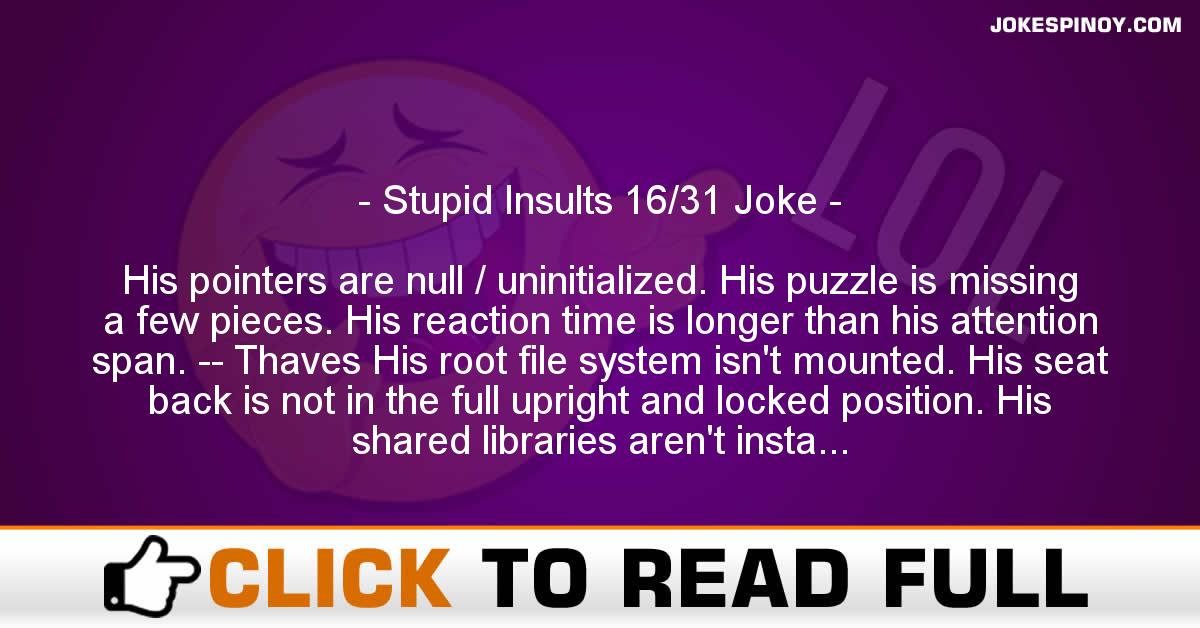 His pointers are null / uninitialized. His puzzle is missing a few pieces. His reaction time is longer than his attention span. — Thaves His root file system isn’t mounted. His seat back is not in the full upright and locked position. His shared libraries aren’t installed. His signal-to-noise ratio is epsilon. His spark can’t jump the gap. His spirit guide is a three-toed sloth. His stack’s not very deep / he has an eight-byte stack. His string’s aren’t null-terminated. His strip is demagnetized. His system administrator is never in. His train tracks aren’t quite parallel. His URL denies outside access. His watch dog is sleeping. His wisdom is stolen from bumper-stickers and T-shirts. Hitler’s evil twin. Hyperspatially interconnected / permanently disconnected neural net. Hypnotized as a child and couldn’t be woken. I’d like to buy him for what he’s worth and sell him for what he thinks he’s worth. If brains were bird droppings, he’d have a clean cage. If brains were dynamite, she wouldn’t have enough to blow her nose / her hat off / the wax out of her ears. If brains were gasoline, he wouldn’t have enough to drive a dinky car around the inside of a cheerio. If brains were grains of sand, he couldn’t fill a dixie cup. If brains were lard, he’d be hard pressed to grease a small pan. If brains were taxed, he’d get a rebate. If brains were water, hers wouldn’t be enough to baptize a flea. If God tried to help him, we’d have an eight day week. If he donated his brain to science it’d set civilization back 50 years.

Topic of Interest:    joke if brains were taxed