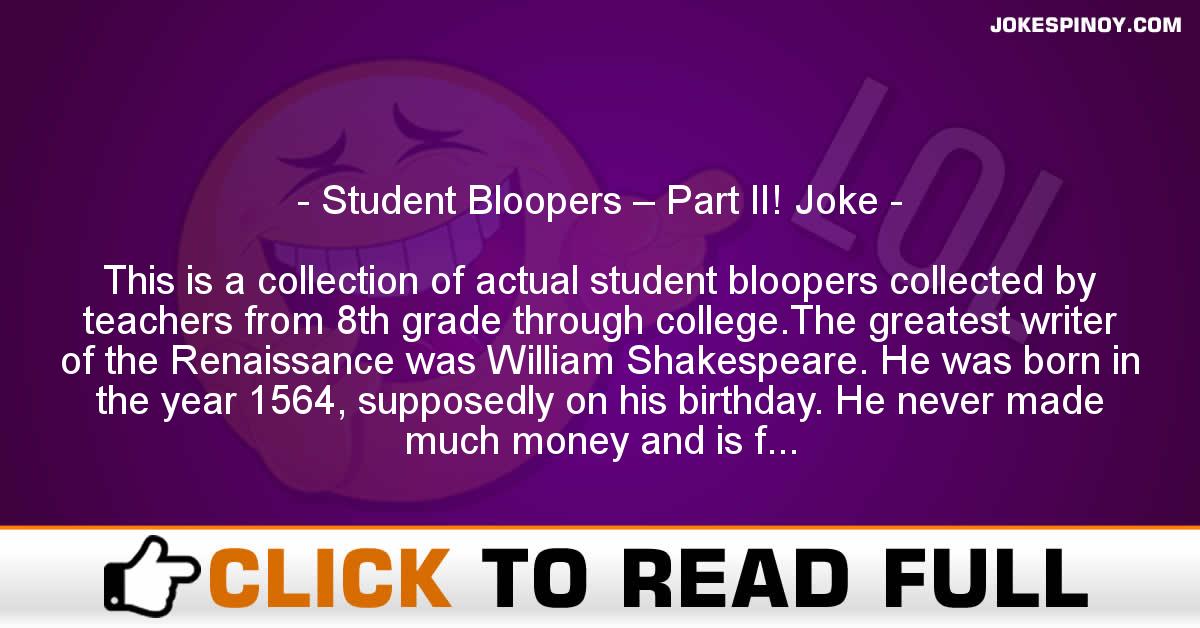 This is a collection of actual student bloopers collected by teachers from 8th grade through college.The greatest writer of the Renaissance was William Shakespeare. He was born in the year 1564, supposedly on his birthday. He never made much money and is famous only because of his plays. He wrote tragedies, comedies, and hysterectomies, all in Islamic pentameter. Romeo and Juliet are an example of a heroic couplet. Romeo’s last wish was to be laid by Juliet.Writing at the same time as Shakespeare was Miguel Cervantes. He wrote Donkey Hote. The next great author was John Milton. Milton wrote Paradise Lost. Then his wife died and he wrote Paradise Regained.One of the causes of the Revolutionary War was the English put tacks in their tea. Also, the colonists would send their parcels through the post without stamps. Finally the colonists won the War and no longer had to pay for taxis. Delegates from the original 13 states formed the Contented Congress. Thomas Jefferson, a Virgin, and Benjamin Franklin were two singers of the Declaration of Independence. Franklin discovered electricity by rubbing two cats backwards and declared, “A horse divided against itself cannot stand.” Franklin died in 1790 and is still dead.Abraham Lincoln became America’s greatest Precedent. Lincoln’s mother died in infancy, and he was born in a log cabin which he built with his own hands. Abraham Lincoln freed the slaves by signing the Emasculation Proclamation. On the night of April 14, 1865, Lincoln went to the theater and got shot in his seat by one of the actors in a moving picture show. The believed assinator was John Wilkes Booth, a supposingly insane actor. This ruined Booth’s career.Johann Bach wrote a great many musical compositions and had a large number of children. In between he practiced on an old spinster which he kept up in his attic. Bach died from 1750 to the present. Bach was the most famous composer in the world and so was Handel. Handel was half German half Italian and half English. He was very large.Beethoven wrote music even though he was deaf. He was so deaf he wrote loud music. He took long walks in the forest even when everyone was calling for him. Beethoven expired in 1827 and later died for this.Louis Pasteur discovered a cure for rabbis.Charles Darwin was a naturalist who wrote the Organ of the Species.Madman Curie discovered radio.And Karl Marx became one of the Marx brothers.The First World War, caused by the assignation of the Arch-Duck by an anahist, ushered in a new error in the anals of human history.