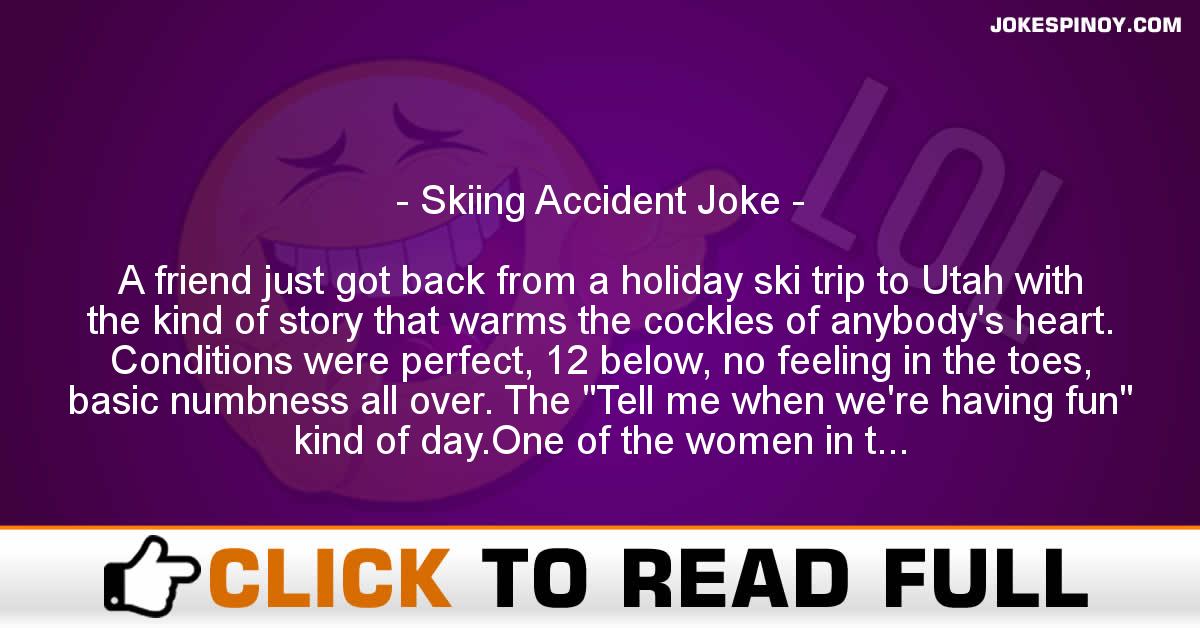 A friend just got back from a holiday ski trip to Utah with the kind of story that warms the cockles of anybody’s heart. Conditions were perfect, 12 below, no feeling in the toes, basic numbness all over. The “Tell me when we’re having fun” kind of day.One of the women in the group complained to her husband that she was in dire need of a restroom. He told her not to worry, that he was sure there was relief at the top of the lift in the form of a powder room for female skiers in distress. He was wrong, of course, and the pain did not go away.If you’ve ever had nature hit its panic button in you, then you know That a temperature of 12 below zero doesn’t help matters. So with time running out, she weighed her options.Her husband, picking up on the intensity of the pain, suggested that since she was wearing an all white ski outfit, she should go off in the woods. No one would ever notice, he assured her. The white will provide more than adequate camouflage. So she headed for the tree line, began disrobing and proceeded to do her thing. If you’ve ever parked on the side of a slope, then you know there is a right way and a wrong way to set your skies so you don’t move. Yup, you got it. She had the skies positioned the wrong way.Steep slopes are not forgiving, even during embarrassing moments. Without any warning, the woman found herself skiing backward, out of control racing through the trees, somehow missing all of them, and on to the slope. Her derriere and the reverse side were still bare, her pants down around her knees, and she was picking up speed all the while she continued on backwards, totally out-of-control, creating an unusual sight for the other skiers.The woman skied, if you define that verb loosely, back under the lift, and finally collided violently with a pylon. The bad news was she broke her arm and was unable to pull up the ski pants. At long last her husband arrived, put an end to her nude show, then went to the base of the mountain and summoned the ski patrol, who transported her to a hospital.In the emergency room she was regrouping when a man with a broken leg was put in a bed next to hers.”So, how’d you break your leg?” She asked, making small talk.”It was the darndest thing you ever saw,” he said “I was riding up this ski lift and suddenly I couldn’t believe my eyes. There was this crazy woman skiing backwards out of control down the mountain with her bare bottom hanging out. I leaned over to get a better look and I guess I didn’t realize how far I’d moved. I fell out of the lift.””So how’d you break your arm?”