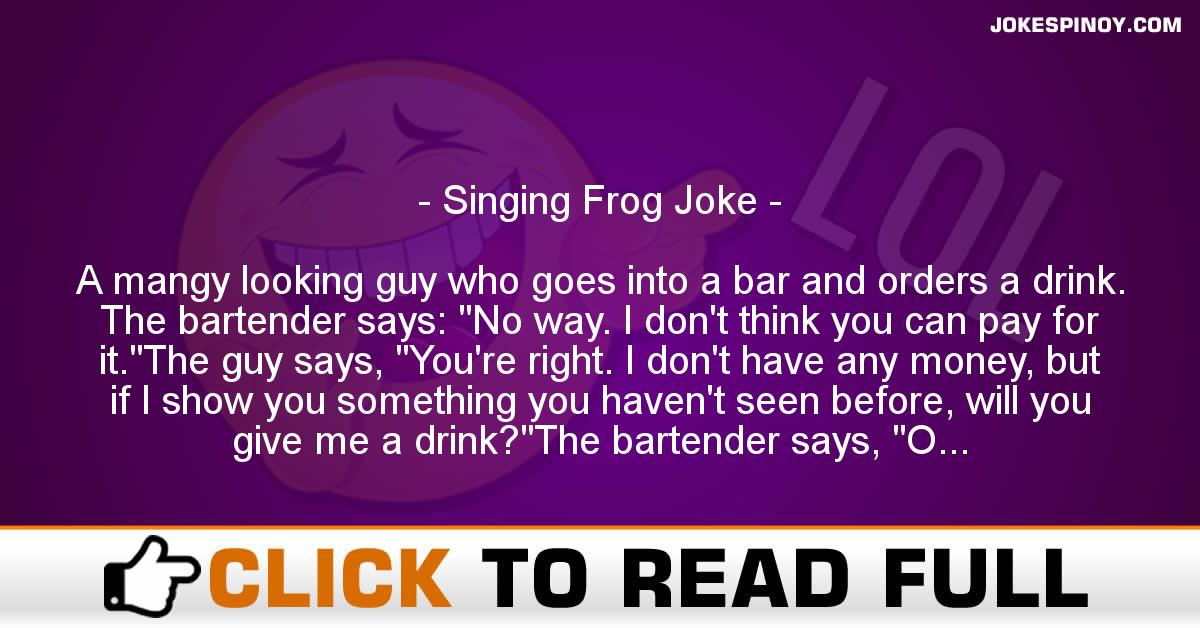 A mangy looking guy who goes into a bar and orders a drink. The bartender says: “No way. I don’t think you can pay for it.”The guy says, “You’re right. I don’t have any money, but if I show you something you haven’t seen before, will you give me a drink?”The bartender says, “Only if what you show me ain’t risque.””Deal!” says the guy and reaches into his coat pocket and pulls out a hamster. He puts the hamster on the bar and it runs to the end of bar, down the bar, across the room, up the piano, jumps on the key board and starts playing Gershwin songs. And the hamster is really good.The bartender says, “You’re right. I’ve never seen anything like that before. That hamster is truly good on the piano.” The guy downs the drink and asks the bartender for another.”Money or another miracle else no drink”, says the bartender. The guy reaches into his coat again and pulls out a frog. He puts the frog on the bar, and the frog starts to sing. He has a marvelous voice and great pitch. A fine singer. A stranger from the other end of the bar runs over to the guy and offers him $300 for the frog.The guy says “It’s a deal.” He takes the three hundred and gives the stranger the frog. The stranger runs out of the bar. The bartender says to the guy “Are you some kind of nut? You sold a singing frog for $300? It must have been worth millions. You must be crazy.””Not so”, says the guy. “The hamster is also a ventriloquist.”

Topic of Interest:    joke about the singing frog