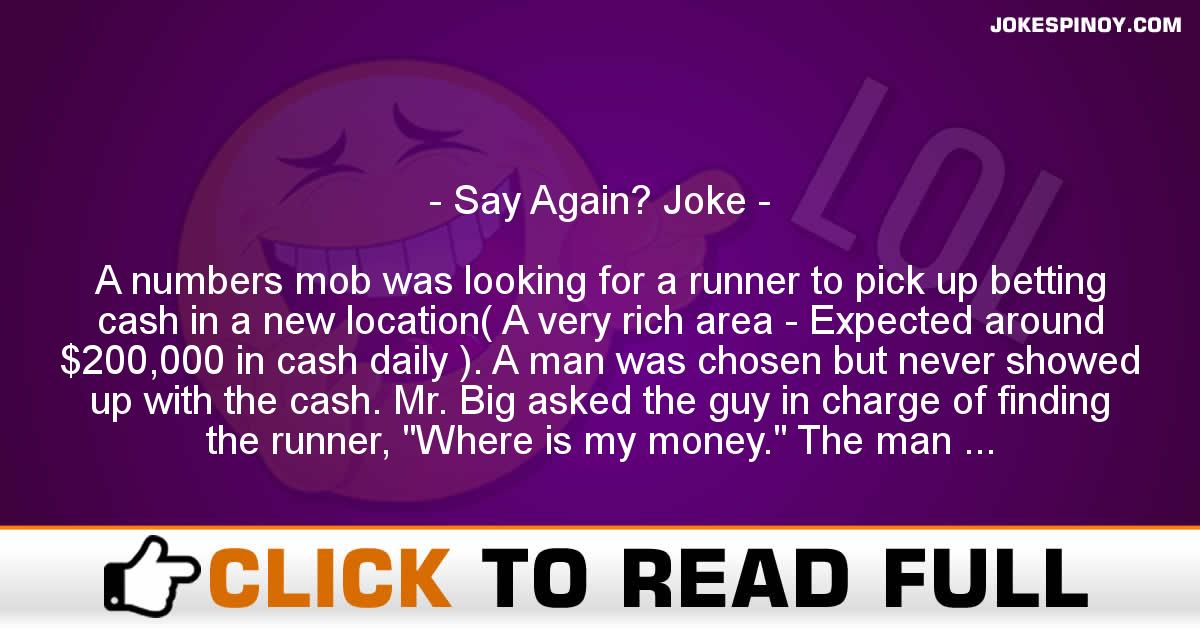 A numbers mob was looking for a runner to pick up betting cash in a new location( A very rich area – Expected around $200,000 in cash daily ). A man was chosen but never showed up with the cash. Mr. Big asked the guy in charge of finding the runner, “Where is my money.” The man replied that he didn’t know and said that he would find him. The man located the new runner and brought him to Mr. Big’s office. Mr. Big said, “Where the f**k is my money? “. The runner looked puzzled and started talking in sign language. Mr. Big said, “What the f**k is this?”The man in charge of hiring the runner explained that he was deaf and dumb and was the only person that he could find to take the job.Mr. Big said, “Do you know how to read sign language?”The man said, ” No, but I’ll find someone who can. “. He comes back with a female interpreter and Mr. Big asks her to ask the runner where his money is. The girl starts asking him in sign language where his money is and the man replies back to her in the same.”Well,” says Mr. Big, “What did he say?”She says he said, “F**k You! “.Mr. Big replied, “You’d better ask him again, I hope he misunderstood you.”The girl asks him again, “Where is the money ” and the man again replied in sign language. “What did he say this time? “, asked Mr. Big.He said ” F**k You, again “. With that, Mr. Big got very upset and told her to tell him, “If he doesn’t tell me where my money is, I’ll cut off his head and throw him in the river!”.She told this to the man and this time he answered, “It’s under the front seat of my car”, again in sign language. ” Well “, asked Mr. Big,” What did he say this time? “.She replied ” He said F**k You! “.