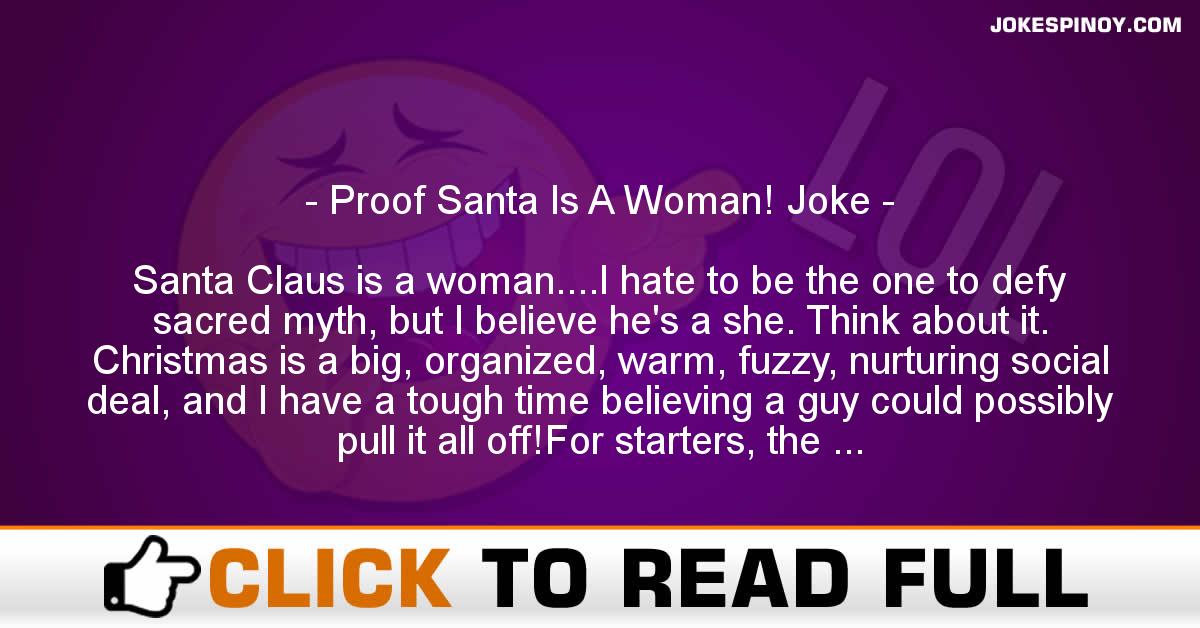 Santa Claus is a woman….I hate to be the one to defy sacred myth, but I believe he’s a she. Think about it. Christmas is a big, organized, warm, fuzzy, nurturing social deal, and I have a tough time believing a guy could possibly pull it all off!For starters, the vast majority of men don’t even think about selecting gifts until Christmas Eve. Once at the mall, they always seem surprised to find only Ronco products, socket wrench sets, and mood rings left on the shelves. On this count alone, I’m convinced Santa is a woman.Surely, if he were a man, everyone in the universe would wake up Christmas morning to find a rotating musical Chia Pet under the tree, still in the bag.Another problem for a he-Santa would be getting there. First of all, there would be no reindeer because they would all be dead, gutted and strapped on to the rear bumper of the sleigh amid wide-eyed, desperate claims that buck season had been extended. Blitzen’s rack would already be on the way to the taxidermist.Even if the male Santa DID have reindeer, he’d still have transportation problems because he would inevitably get lost up there in the snow and clouds and then refuse to stop and ask for directions.Other reasons why Santa can’t possibly be a man:Men can’t pack a bag.Men would rather be dead than caught wearing red velvet.Men would feel their masculinity is threatened having to be seen with all those elves.Men don’t answer their mail.Men would refuse to allow their physique to be described even in jest as anything remotely resembling a “bowlful of jelly.”Men aren’t interested in stockings unless somebody’s wearing them.Having to do the Ho Ho Ho thing would seriously inhibit their ability to pick up women.Finally, being responsible for Christmas would require a commitment!