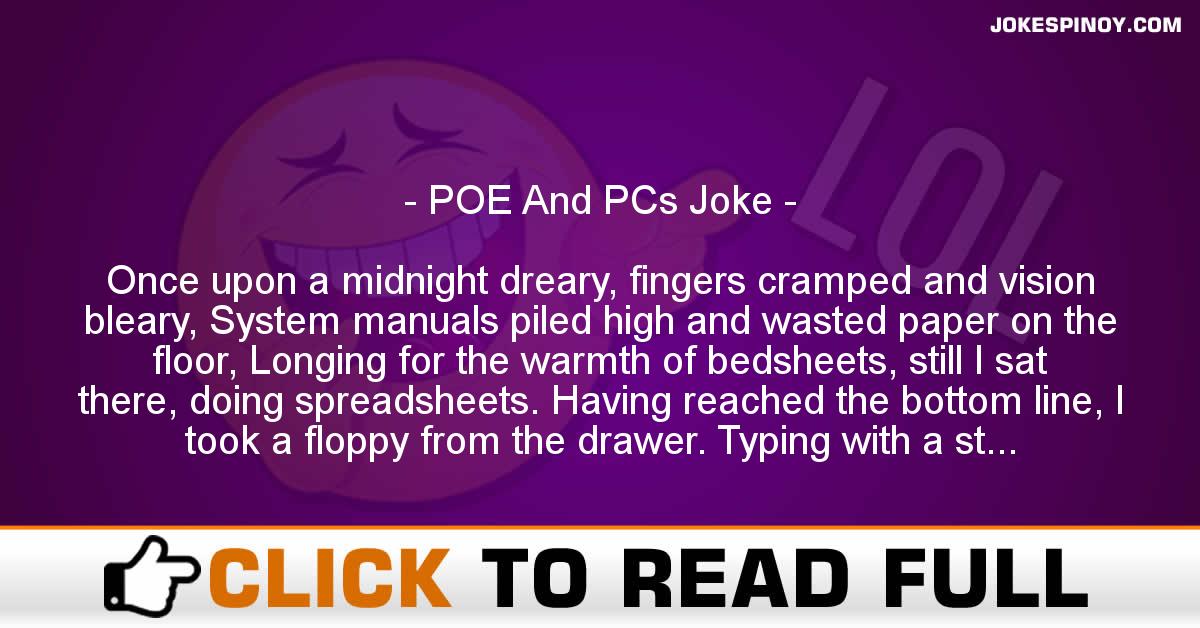 Once upon a midnight dreary, fingers cramped and vision bleary, System manuals piled high and wasted paper on the floor, Longing for the warmth of bedsheets, still I sat there, doing spreadsheets. Having reached the bottom line, I took a floppy from the drawer. Typing with a steady hand, I then invoked the SAVE command And waited for the disk to store, only this and nothing more.Deep into the monitor peering, long I sat there wond’ring, fearing, Doubting, while the disk kept churning, turning yet to churn some more. “Save!” I said, “You cursed mother! Save my data from before!” One thing did the phosphors answer, only this and nothing more, Just, “Abort, Retry, Ignore?”Was this some occult illusion? Some maniacal intrusion? These were choices undesired, ones I’d never faced before. Carefully, I weighed the choices as the disk made impish noises. The cursor flashed, insistent, waiting, baiting me to type some more. Clearly I must press a key, choosing one and nothing more, From “Choose Abort, Retry, Ignore?”With my fingers pale and trembling, slowly toward the keyboard bending, Longing for a happy ending, hoping all would be restored, Praying for some guarantee, timidly I pressed a key. But on the screen there still persisted words appearing as before. Ghastly grim, they blinked and taunted, haunted, as my patience wore, Saying “Abort, Retry, Ignore?”I tried to catch the chips off-guard — I pressed again, but twice as hard. I pleaded with the cursed machine: I begged and cried and then I swore. Now in desperation, trying random combinations, Still there came the incantation, just as senseless as before. Cursor blinking, angrily winking, blinking nonsense as before. Reading, “Abort, Retry, Ignore?”There I sat, distraught, exhausted by my own machine accosted Getting up I turned away and paced across the office floor. And then I saw dreadful sight: a lightning bolt cut through the night. A gasp of horror overtook me, shook me to my core. The lightning zapped my previous data, lost and gone forevermore. Not even, “Abort, Retry, Ignore?”To this day I do not know the place to which lost data goes. What demonic nether world is wrought where data will be stored, Beyond the reach of mortal souls, beyond the ether, into black holes? But sure as there’s C, Pascal, Lotus, Ashton-Tate and more, You will one day be left to wander, lost on some Plutonian shore, Pleading, “Abort, Retry, Ignore?”


Do you have a joke? share it with us! Click on the button bellow to send us your joke.

You may have heard that laughter is the best medicine. However, have you ever thought about it or not? Well, laughing and smiling are infectious. Looking at someone and exchanging a smile can make you reciprocate naturally, despite having a rough day. While only a few people out there know the fact that laughter is good for your health. It doesn't only make you feel good but can be a good cure for the blues.

To bring more laughter into your life, let's have a look at the key health benefits of laughter below.

Healthy laughter can help in burning calories. Even more, laughter also acts as a cheat sheet when it comes to getting a toned stomach. Most importantly, laughing for 10 to 15 minutes can let you burn up to 40 calories. It means watching a 90-minute comic movie can help you to burn up to 240 calories with ease.

Laughter can let you relax your entire body. Even more, it can bring tons of benefits to your mental health as well. A good laughter time will not only let you have some joy, but it can also let you relive the feelings of stress, fear, and depression effectively. Laughing can also improve your mood and bring optimistic, positive feelings with ease.

Is the last show you watched before sleep is from a comic genre? Then, you have higher chances of getting a peaceful sleep. It is because laughter's good bout before sleeping can reduce anxiety. It can also relax your muscles and help you to have a better sleep quality with ease. It is important after spending a long and hectic day.

University of Maryland researchers have found that laughter can improve your blood vessels' health. It can boost their function and cause your blood vessels to expand and dilate. This situation will play a vital role in improving your blood flow and circulation effectively. So, overall, laughter is important to maintain the best level of endothelium.

Laughter can increase antibody-producing cells in your body. It can also enhance T-cells' effectiveness. Consequently, this will reduce the risks of getting cough and the common cold. As it can help improve the immune system, the strong immune system will ultimately keep the infections and allergies at bay. Even more, laughter can reduce negative thoughts that can impact your immune system. Due to this, a happier person is capable of fighting diseases more than others. It is because he is always in the right mind frame, and his immune system will be in a stress-free zone. Consequently, it will improve your overall health.

Have you felt a sense of relief and relaxation after laughter? It is because laughing involves deep exhalation. It will, in return, lower your blood pressure and lead you to a calmer state. Like deep breathing, laughing can also offer you a cleansing effect that is beneficial for respiratory ailments.

Have you ever thought about how laughter can aid in easing your pain? Well, when you laugh, your muscles move. This muscle movement will expand your blood vessels and send more blood to parts of your body. Even more, the breathing rate also increases and oxygen level in your blood, therefore. So, healthy laughter is always the best way to ease pain naturally and effortlessly.

Scientists at the Loma Linda University have found that laughter can improve learning and memory. It can also reduce cortisol levels as well in your body. Cortisol is a stress hormone that can impact your mind and body negatively. However, laughter can counteract these effects with ease.

A good laugh can do wonders to improve blood circulation and flow in your body. Even more, it impacts oxygenation as well positively. Also, laughing can boost your heart rate and oxygen consumption immediately and effortlessly. Consequently, this can help in reducing cardiovascular diseases, improving heart health and respiration system.

With every laugh, your face features send a signal to the brain. This signal will help in relieving the endorphins. It will act as a pain killer, reduce stress, and make you feel happy.

Overall, laughter therapy is highly effective in enjoying various health benefits in life. Make sure to have it daily.

We have detected that you are using extensions to block ads. Please support us by disabling these ads blocker.