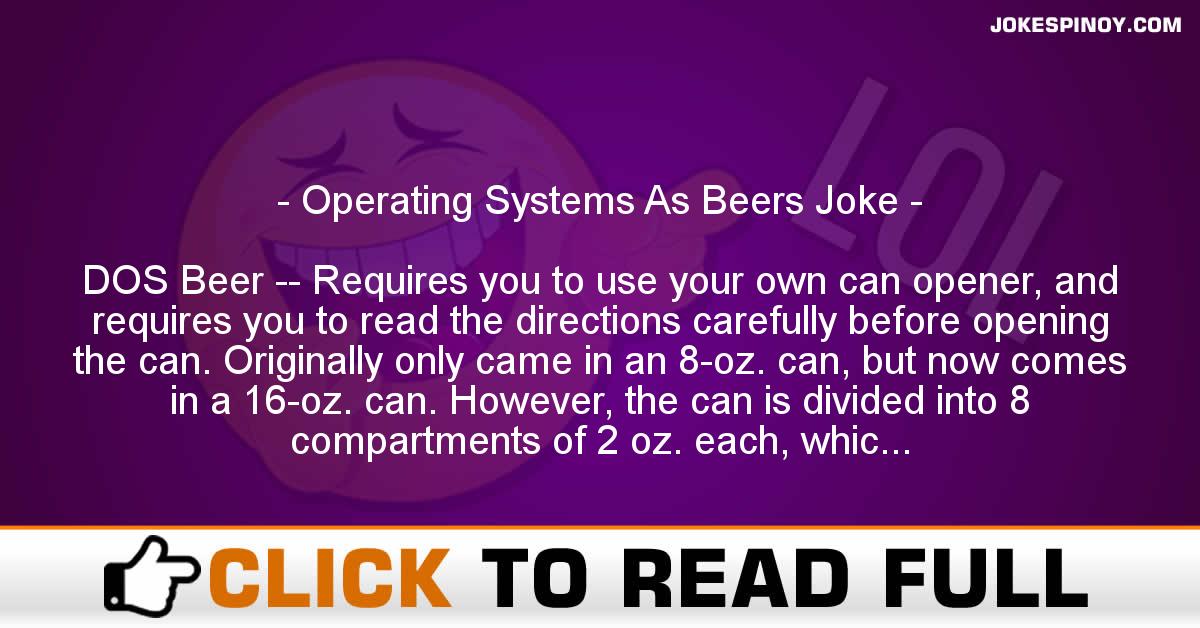 DOS Beer — Requires you to use your own can opener, and requires you to read the directions carefully before opening the can. Originally only came in an 8-oz. can, but now comes in a 16-oz. can. However, the can is divided into 8 compartments of 2 oz. each, which have to be accessed separately. Soon to be discontinued, although a lot of people are going to keep drinking it after it’s no longer available.Mac Beer — At first, came only a 16-oz. can, but now comes in a 32-oz. can. Considered by many to be a “light” beer. All the cans look identical. When you take one from the fridge, it opens itself. The ingredients list is not on the can. If you call to ask about the ingredients, you are told that “you don’t need to know.” A notice on the side reminds you to drag your empties to the trashcan.Windows 3.1 Beer — The world’s most popular. Comes in a 16-oz. can that looks a lot like Mac Beer’s. Requires that you already own a DOS Beer. Claims that it allows you to drink several DOS Beers simultaneously, but in reality you can only drink a few of them, very slowly, especially slowly if you are drinking the Windows Beer at the same time. Sometimes, for apparently no reason, a can of Windows Beer will explode when you open it.OS/2 Beer — Comes in a 32-oz can. Does allow you to drink several DOS Beers simultaneously. Allows you to drink Windows 3.1 Beer simultaneously too, but somewhat slower. Advertises that its cans won’t explode when you open them, even if you shake them up. You never really see anyone drinking OS/2 Beer, but the manufacturer (International Beer Manufacturing) claims that 9 million six-packs have been sold.Windows 95 Beer — You can’t buy it yet, but a lot of people have taste-tested it and claim it’s wonderful. The can looks a lot like Mac Beer’s can, but tastes more like Windows 3.1 Beer. It comes in 32-oz. cans, but when you look inside, the cans only have 16 oz. of beer in them. Most people will probably keep drinking Windows 3.1 Beer until their friends try Windows 95 Beer and say they like it. The ingredients list, when you look at the small print, has some of the same ingredients that come in DOS beer, even though the manufacturer claims that this is an entirely new brew.Windows NT Beer — Comes in 32-oz. cans, but you can only buy it by the truckload. This causes most people to have to go out and buy bigger refrigerators. The can looks just like Windows 3.1 Beer’s, but the company promises to change the can to look just like Windows 95 Beer’s – after Windows 95 beer starts shipping. Touted as an “industrial strength” beer, and suggested only for use in bars.Unix Beer — Comes in several different brands, in cans ranging from 8 oz. to 64 oz. Drinkers of Unix Beer display fierce brand loyalty, even though they claim that all the different brands taste almost identical. Sometimes the pop-tops break off when you try to open them, so you have to have your own can opener around for those occasions, in which case you either need a complete set of instructions, or a friend who has been drinking Unix Beer for several years.AmigaDOS Beer — The company has gone out of business, but their recipe has been picked up by some weird German company, so now this beer will be an import. This beer never really sold very well because the original manufacturer didn’t understand marketing. Like Unix Beer, AmigaDOS Beer fans are an extremely loyal and loud group. It originally came in a 16-oz. can, but now comes in 32-oz. cans too. When this can was originally introduced, it appeared flashy and colorful, but the design hasn’t changed much over the years, so it appears dated now. Critics of this beer claim that it is only meant for watching TV anyway.VMS Beer — Requires minimal user interaction, except for popping the top and sipping. However cans have been known on occasion to explode, or contain extremely un-beer-like contents.