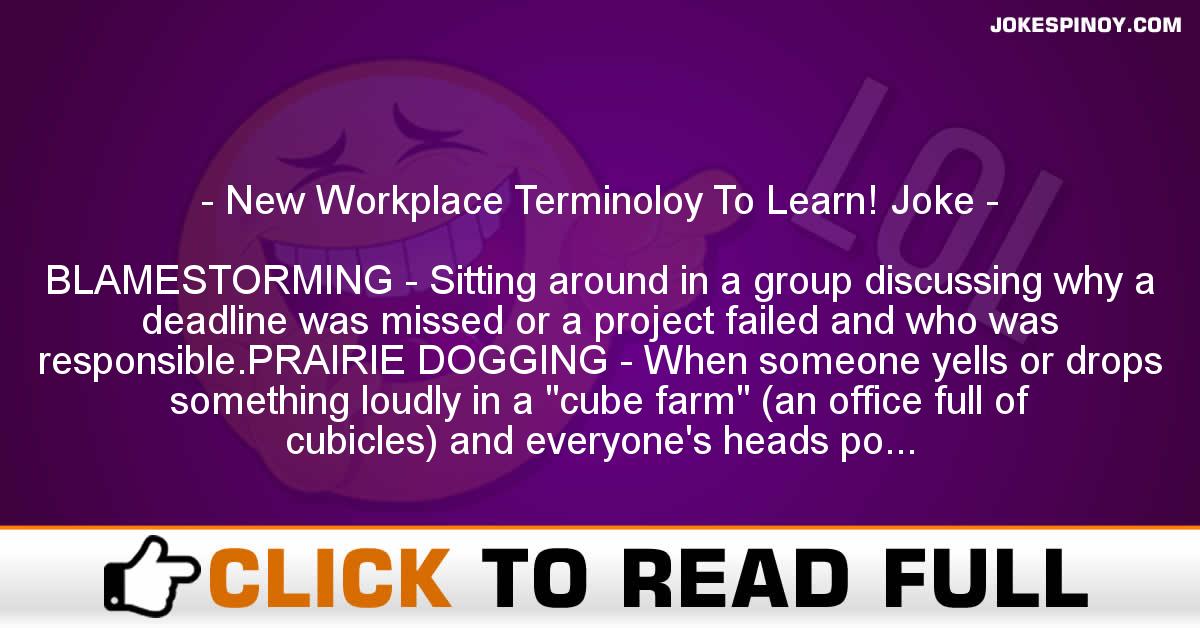 BLAMESTORMING – Sitting around in a group discussing why a deadline was missed or a project failed and who was responsible.PRAIRIE DOGGING – When someone yells or drops something loudly in a “cube farm” (an office full of cubicles) and everyone’s heads pop up over the walls to see what’s going on.TOURISTS – People who take training cla*ses just to get a vacation from their jobs. “We had three serious students in the cla*s; the rest were just tourists.”TREEWARE – Printed computer software/hardware documentation.CLM (Career Limiting Move) – Used among microserfs to describe ill-advised activity. Trashing your boss while he or she is within earshot is a serious CLM. (Also known as CEB – Career Ending Behavior)OHNOSECOND – That minuscule fraction of time in which you realize that you’ve just made a BIG mistake. (See CLM)ADMINISPHERE – The rarefied organizational layers beginning just above the rank and file. Decisions that fall from the admini-sphere are often profoundly inappropriate or irrelevant to the problems they were designed to solve.DILBERTED – To be exploited and oppressed by your boss. Derived from the experiences of Dilbert, the engineer in the job-from-hell comic strip character. “I’ve been dilberted again. The old man revised the specs for the fourth time this week.”SEAGULL MANAGER – A manager who flies in, makes a lot of noise, poops on everything, and then leaves.SALMON WEEK – The experience of spending an entire week swimming upstream only to die, and someone else get the benefit.404 – Someone who’s clueless. From the World Wide Web error message “404 Not Found,” meaning that the requested document could not be located. “Don’t bother asking him… he’s 404, man.”PERCUSSIVE MAINTENANCE – The fine art of whacking an electronic device *just right* to get it to work again.