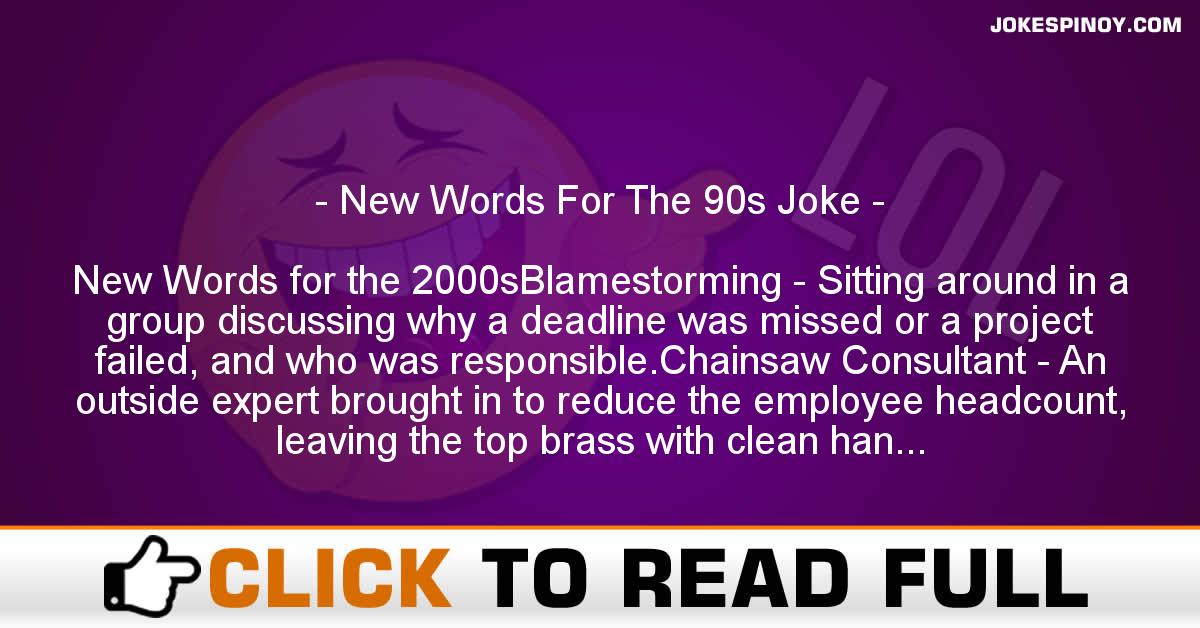 New Words for the 2000sBlamestorming – Sitting around in a group discussing why a deadline was missed or a project failed, and who was responsible.Chainsaw Consultant – An outside expert brought in to reduce the employee headcount, leaving the top bra*s with clean hands.Percussive Maintenance – The fine art of whacking the crap out of an electronic device to get it to work again.Uninstalled – Euphemism for being fired. Heard on the voicemail of a vice president at a downsizing computer firm: “You have reached the number of an uninstalled vice president. Please dial our main number and ask the operator for a*sistance.” See also Decruitment.SITCOMs – What yuppies turn into when they have children and one of them stops working to stay home with the kids. Stands for Single Income, Two Children, Oppressive Mortgage.Starter Marriage – A short-lived first marriage that ends in a divorce with no kids, no property and no regrets.Tourists – People who take training cla*ses just to get a vacation from their jobs. “We had three serious students in the cla*s; the rest were just tourists.”Alpha Geek – The most knowledgeable, technically proficient person in an office or work group. “Ask Larry, he’s the alpha geek around here.”Dancing Baloney – Little animated GIFs and other Web F/X that are useless and serve simply to impress clients. “This page is kinda dull. Maybe a little dancing baloney will help.”Flight Risk – Used to describe employees who are suspected of planning to leave a company or department soon.Generica – Features of the American landscape that are exactly the same no matter where one is. “We were so lost in generica, I actually forgot what city we were in.”Nyetscape – Nickname for AOL’s less-than-full-featured Web browser.PEBCAK – Tech support shorthand for “Problem Exists Between Chair and Keyboard.” (Techies are a frustrated, often arrogant lot. They’ve submitted numerous acronyms and terms that poke fun at the clueless users who call them up with frighteningly stupid questions. Another variation on the above is ID10T: “This guy has an ID-Ten-T on his system.”)Square-headed Girlfriend – Another word for a computer. The victim of a square-headed girlfriend is a “computer widow.”