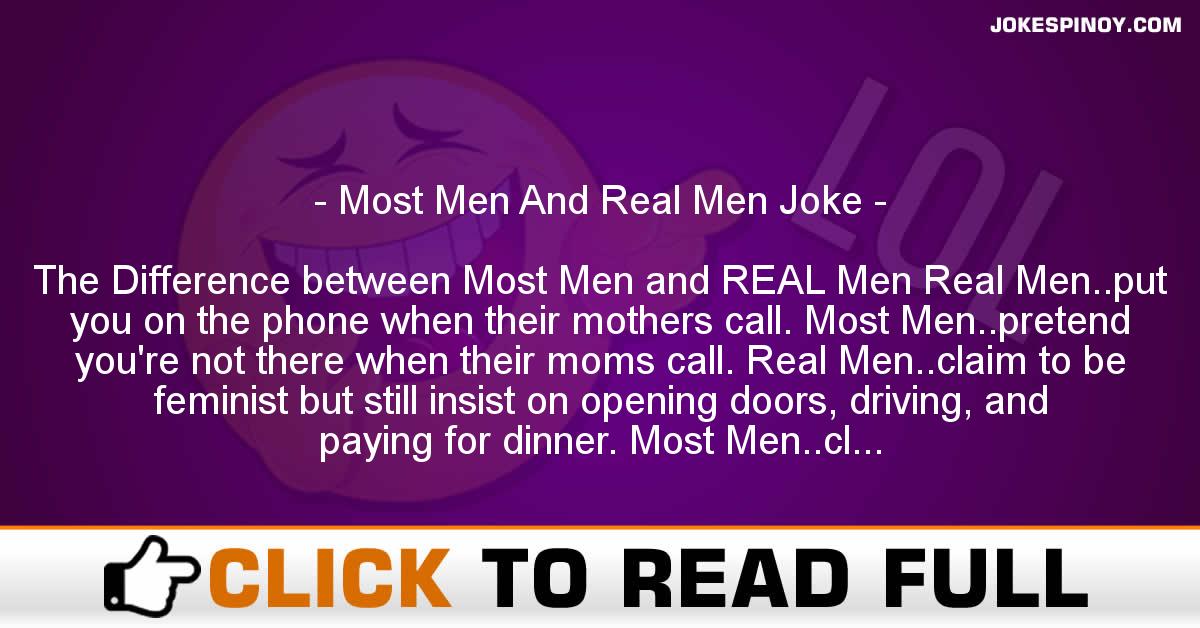 The Difference between Most Men and REAL Men Real Men..put you on the phone when their mothers call. Most Men..pretend you’re not there when their moms call. Real Men..claim to be feminist but still insist on opening doors, driving, and paying for dinner. Most Men..claim to be feminists because they let YOU open doors, drive, and pay for dinner. Real Men..know what they want to be doing five years down the road. Most Men..are not sure what they want to be doing later tonight. Real Men..really know how to make you relax. Most Men…really know how to make you laugh. Real Men..read Crichton, watch Rather, play golf. Most Men..read King, watch Seinfeld, play p***r. Real Men..make a lot of money before they are 30. Most Men..make a lot of mistakes before they are 30. Real Men..wear ties with stripes, shirts with buttons, and s***s with laces. Most Men..wear high school T-shirts they’ve actually owned since high school. Real Men..think perfume (yours) is a turn-on. Most Men..think sweat (theirs) is a turn-on. Real Men..balance their checkbooks. Most Men..balance their loans so that they never hit up the same buddy twice in a row. Real Men..have an internist, a tailor and an accountant. Most Men..have a barber, a bartender and a mechanic. Real Men..are afraid of becoming their fathers. Most Men..are afraid of becoming Real Men. Real Men..start their own businesses. Most Men..quit their jobs. Real Men..order wine based on more than the price. Most Men..bring their own beer