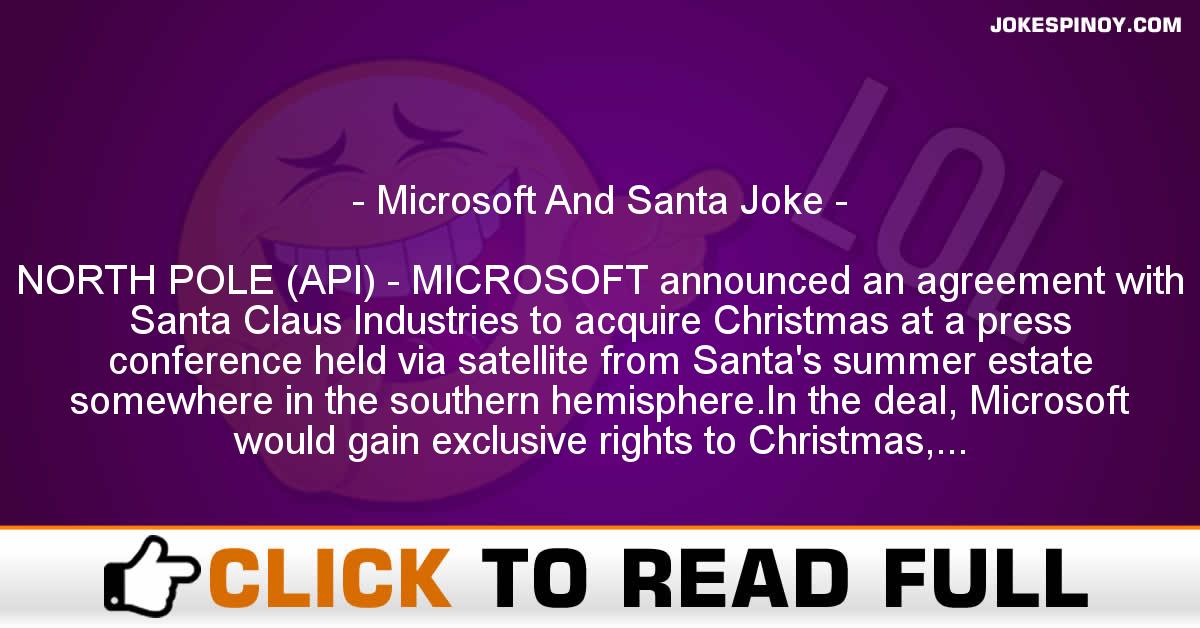 NORTH POLE (API) – MICROSOFT announced an agreement with Santa Claus Industries to acquire Christmas at a press conference held via satellite from Santa’s summer estate somewhere in the southern hemisphere.In the deal, Microsoft would gain exclusive rights to Christmas, Reindeer, and other unspecified inventions. In addition, Microsoft will gain access to millions of households through the Santa Sleigh. The announcement also included a notice that beginning Jan 1, 1997, Christmas and the Reindeer names would be copyrighted by Microsoft. This move was facilitated by the recently acquired MS Court.Microsoft stated its commitment to “all who have made Christmas great,” and vowed to “make licensing of the Christmas and Reindeer names available to all.” It is believed that the guidelines for licensing these names, due before Halloween, will be very strict. When asked “Why buy Christmas?” Bill Gates replied “Microsoft has been working on a more efficient delivery mechanism for all of our products for some time, but recognized that the Santa Sleigh has some immediate benefits. We’ll use it first for the release of Windows97 and Office97.”In a multimedia extravaganza, the attendees were shown a seemingly endless video stream of products that make up the deal. It ended with a green and red version of the Microsoft logo, and a new Christmas 96 trademark, leading into the announcement of the first product from the deal.Vixen, the new Director of Holidays and Celebrations said, “The first step is to a*similate Christmas within the Microsoft organization. This will take some time, so don’t expect any changes this year.” She continued, “our big plans are for next year, when we release Christmas96. It will be bigger and better than last year.” She further elaborated that “Windows95 users who sign up with MS Network will get previews of Christmas 96 as early as November first.”Christmas 96 is scheduled for release in December of 1996, though one unnamed source said that it is dangerously close to the end of the year and may slip into the first half of1997. An economist at Goldman Sachs explained that a slip would be catastrophic to next year’s economy and the nation’s tax revenue, possibly requiring the IRS to move the deadline for filing income tax returns to three months after Christmas, whenever that was. “But it could be good in the long term,” he explained. “With Microsoft controlling Christmas, we may see it move to May or June, which are much slower months for retailers. This may serve to even out the economy over the year.”When asked if other holidays are being considered, Mr. Gates explained that “Christmas is the flagship of holidays, so we wanted to start there. Not all holidays are available for sale, and the remaining will have to show a good long term business,” suggesting that holidays with a short history may not be in the plans.Though specific terms of the agreement were withheld pending final FTC approval, a Santa official confirmed that the deal was “sizeable, even for a man of Santa’s stature.” Some analysts think that Santa has saturated the Holiday market, and is looking for a means to expand his business to year ’round products and services. Others contend that the Jolly Red Man is looking to retire in Redmond.A spokesperson for the most famous Reindeer could not be reached for comment.