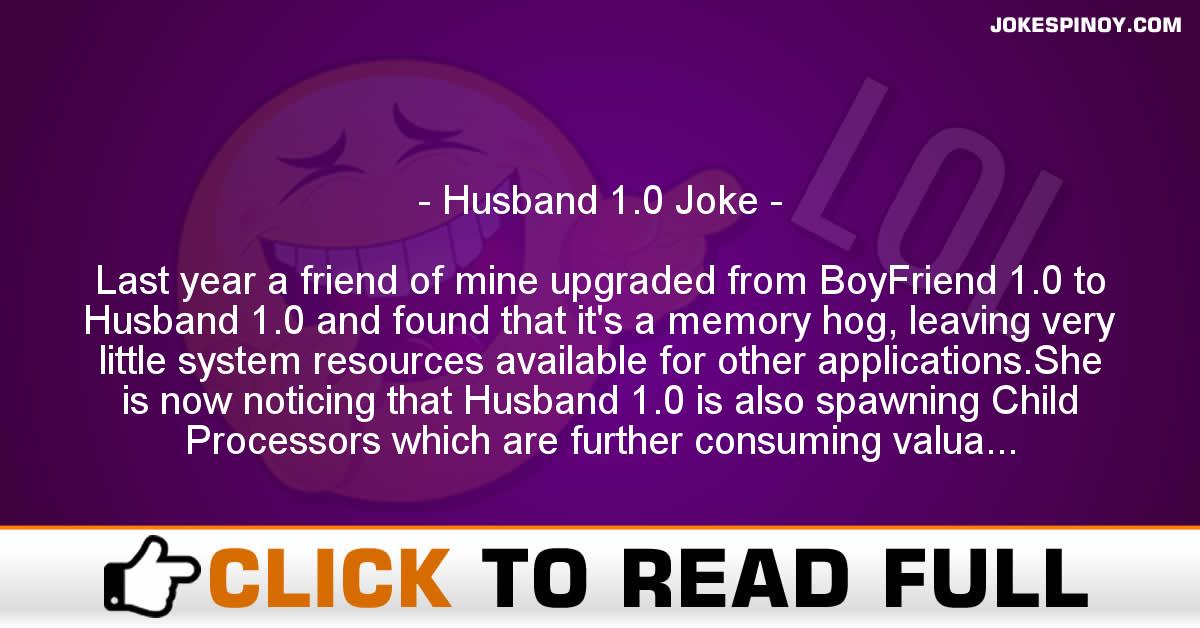 Last year a friend of mine upgraded from BoyFriend 1.0 to Husband 1.0 and found that it’s a memory hog, leaving very little system resources available for other applications.She is now noticing that Husband 1.0 is also spawning Child Processors which are further consuming valuable resources. No mention of this particular phenomena was included in the product brochure or the documentation, though other users have informed her that this is to be expected due to the nature of the application.Not only that, Husband 1.0 installs itself such, that it is always launched at system initialization, where it can monitor all other system activity. She’s finding that some applications such as SpendingSpree 2.4, GirlsNight 3.5 and C**ktailNight 7.0 are no longer able to run in the system at all, crashing the system when selected (even though they always worked fine before).During installation, Husband 1.0 provides no option as to the installation of undesired Plug-ins such as MotherInLaw 5.8 and BrotherInLaw Beta release. Also, system performance seems to diminish with each pa*sing day.Some features she’d like to see in the upcoming Husband 2.0 include:1. A “Yes I’ll cook, clean etc.” button.2. An install shield feature that allows Husband 2.0 be installed with the option to uninstall at anytime without the loss of cache and other system resources.I myself decided to avoid the headache a*sociated with Husband 1.0 by sticking with BoyFriend 2.0. Even here, however, I found many problems.Apparently you cannot install BoyFriend 2.0 on top of BoyFriend 1.0; each program begins damaging the other. You must uninstall BoyFriend 1.0 first. Other users say this is a long standing bug that I should have known about. You’d think they would have fixed such a stupid bug by now! To make matters worse, the uninstall program for BoyFriend 1.0 doesn’t work very well, leaving undesirable traces of the application in the system.Another thing–all versions of BoyFriend 1.0 continually popup little annoying messages about the advantages of upgrading to Husband 1.0.Bug WarningHusband 1.0 has an undocumented bug. If you try to install Lover 1.1 before uninstalling Husband 1.0, Husband 1.0 will delete MS Clothing allowance files, before doing the uninstall himself.More applications that won’t run with Husband 1.0 include Chippendale 2.0, Netballwatching 3.5, Suremores***s 6.0, and Cleanup 4.3.Applications that run very well with Husband 1.0, however, include Bummingaround 1.0, Pubnight 2.3, Golfing 2.7, P***rnight 5.3, and Wanderingeyes 4.9.