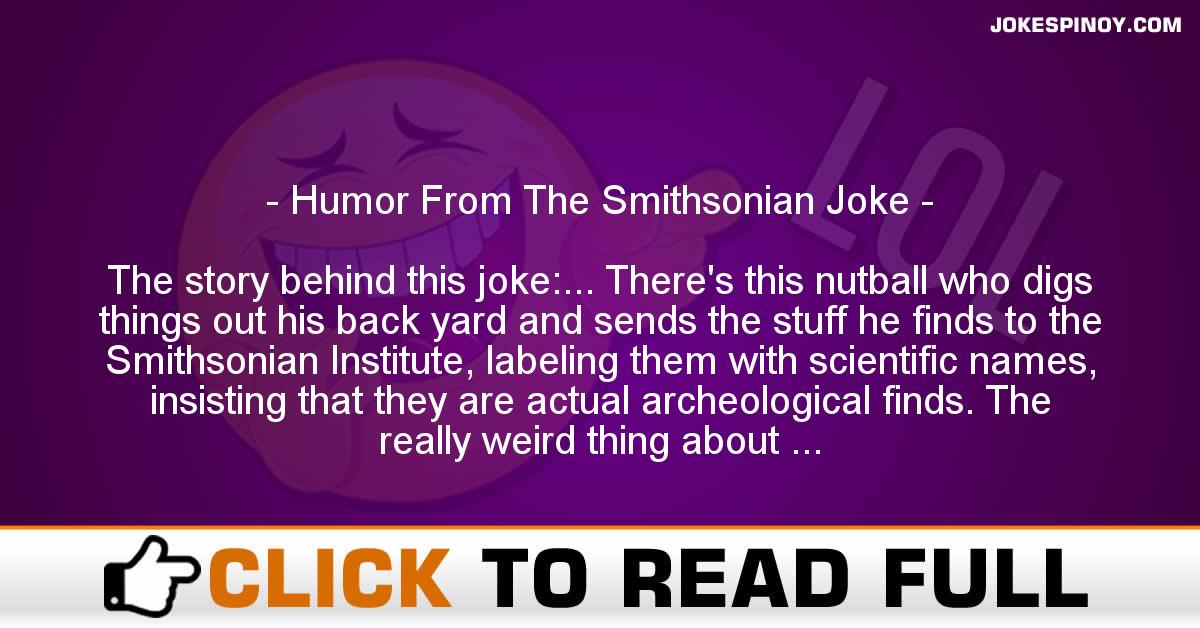 The story behind this joke:… There’s this nutball who digs things out his back yard and sends the stuff he finds to the Smithsonian Institute, labeling them with scientific names, insisting that they are actual archeological finds. The really weird thing about these letters is that this guy really exists and does this in his spare time!Paleoanthropology DivisionSmithsonian Institute207 Pennsylvania AvenueWashington, DC 20078Dear Sir:Thank you for your latest submission to the Institute, labeled “211-D, layer seven, next to the clothesline post. Hominid skull.”We have given this specimen a careful and detailed examination, and regret to inform you that we disagree with your theory that it represents “conclusive proof of the presence of Early Man in Charleston County two million years ago. “Rather, it appears that what you have found is the head of a Barbie doll, of the variety one of our staff, who has small children, believes to be the “Malibu Barbie”.It is evident that you have given a great deal of thought to the analysis of this specimen, and you may be quite certain that those of us who are familiar with your prior work in the field were loathe to come to contradiction with your findings. However, we do feel that there are a number of physical attributes of the specimen which might have tipped you off to it’s modern origin:1. The material is molded plastic. Ancient hominid remains are typically fossilized bone.2. The cranial capacity of the specimen is approximately 9 cubic centimeters, well below the threshold of even the earliest identified proto-hominids.3. The dent**ion pattern evident on the “skull” is more consistent with the common domesticated dog than it is with the “ravenous man-eating Pliocene clams” you speculate roamed the wetlands during that time. This latter finding is certainly one of the most intriguing hypotheses you have submitted in your history with this institution, but the evidence seems to weigh rather heavily against it. Without going into too much detail, let us say that:A. The specimen looks like the head of a Barbie doll that a dog has chewed on.B. Clams don’t have teeth.It is with feelings tinged with melancholy that we must deny your request to have the specimen carbon dated. This is partially due to the heavy load our lab must bear in it’s normal operation, and partly due to carbon dating’s notorious inaccuracy in fossils of recent geologic record. To the best of our knowledge, no Barbie dolls were produced prior to 1956 AD, and carbon dating is likely to produce wildly inaccurate results. Sadly, we must also deny your request that we approach the National Science Foundation’s Phylogeny Department with the concept of a*signing your specimen the scientific name “Australopithecus spiff-arino.” Speaking personally, I, for one, fought tenaciously for the acceptance of your proposed taxonomy, but was ultimately voted down because the species name you selected was hyphenated, and didn’t really sound like it might be Latin.However, we gladly accept your generous donation of this fascinating specimen to the museum. While it is undoubtedly not a hominid fossil, it is, nonetheless, yet another riveting example of the great body of work you seem to accumulate here so effortlessly. You should know that our Director has reserved a special shelf in his own office for the display of the specimens you have previously submitted to the Institution, and the entire staff speculates daily on what you will happen upon next in your digs at the site you have discovered in your back yard. We eagerly anticipate your trip to our nation’s capital that you proposed in your last letter, and several of us are pressing the Director to pay for it. We are particularly interested in hearing you expand on your theories surrounding the “trans-positating fillifitation of ferrous ions in a structural matrix” that makes the excellent juvenile Tyrannosaurus rex femur you recently discovered take on the deceptive appearance of a rusty 9-mm Sears Craftsman automotive crescent wrench.Yours in Science,Harvey RoweCurator, Antiquities