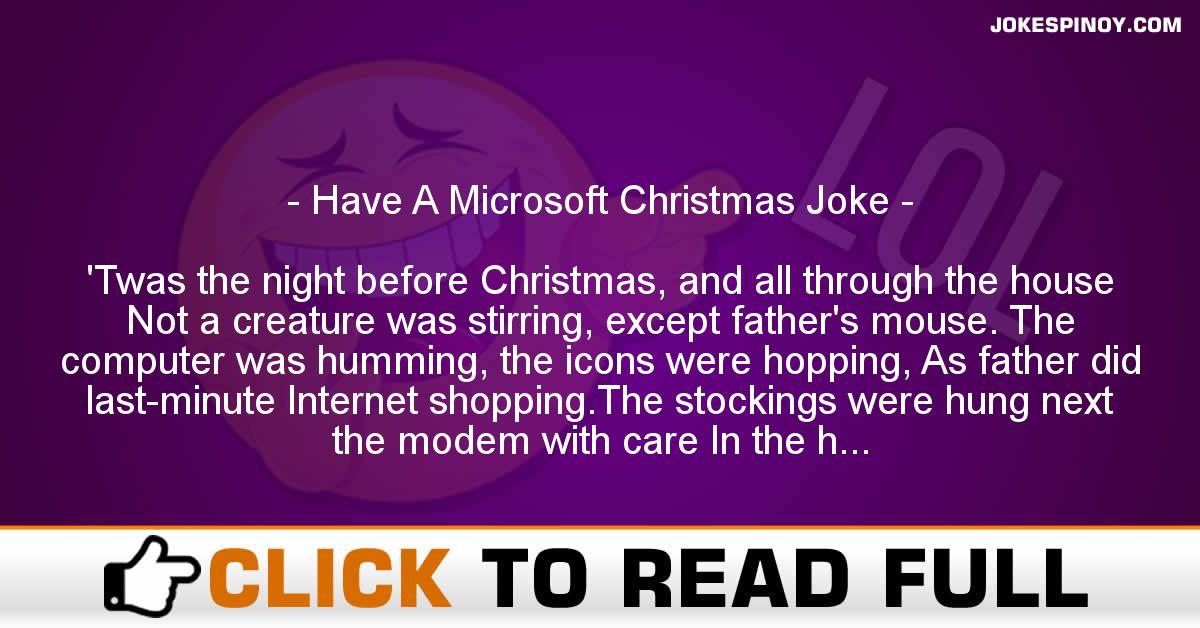 ‘Twas the night before Christmas, and all through the house Not a creature was stirring, except father’s mouse. The computer was humming, the icons were hopping, As father did last-minute Internet shopping.The stockings were hung next the modem with care In the hope that Santa would bring new software. The children were nestled all snug in their beds, With visions of computer games filling their heads.Dark Forces for Billy, Doom II for Dan, Carmen Sandiego for Pamela Ann. The letters to Santa had been sent out by mum, To [email protected]–Which now had been re-routed to Washington State Where Santa’s workshop had been moved by Bill Gates. All the elves and the reindeer had had to skedaddle To flashy new quarters in suburban Seattle. After living a life that was simple and spare, Santa now finds he’s a new billionaire, With a shiny red Porsche in place of his sleigh, And a house on Lake Washington just down the way > From where Bill has his mansion. The old fellow preens In black Gucci boots and red Calvin Klein jeans. The elves have stock options and desks with a view, Where they write computer code for Johnny and Sue.No more dolls or tin soldiers or little toy drums Will be under the tree, only compact disk roms With the Microsoft label. So spin up your drive, >From now on Christmas runs only on Win95. More rapid than eagles the competitors came, And Bill whistled, and shouted, and called them by name. “Now, ADOBE! now, CLARIS! now, INTUIT! too, Now, APPLE! and NETSCAPE! you’re all of you through, It’s Microsoft’s SANTA that the kids can’t resist, It’s the ultimate software with a traditional twist – Recommended by no less than the jolly old elf, And on the package, a picture of Santa himself. Get ’em young, keep ’em long, is Microsoft’s theme, And a merger with Santa is a marketer’s dream. To the top of the NASDAQ! To the top of the Dow! Now dash away! dash away! dash away – wow!” And mum in her ‘kerchief and me in my cap, Had just settled down for a long winter’s nap, When out on the lawn there arose such a clatter, The whirr and the hum of our satellite platter, As it turned toward that new Christmas star in the sky, The SANTALITE owned by the Microsoft guy. As I sprang from my bed and was turning around, My computer turned on with a Jingle-Bells sound. And there on the screen was a smiling Bill Gates Next to jolly old Santa, two arm-in-arm mates. And I heard them exclaim in voices so bright, have a Microsoft Christmas, and to all a good night!The above document was written by Chet Raymo.