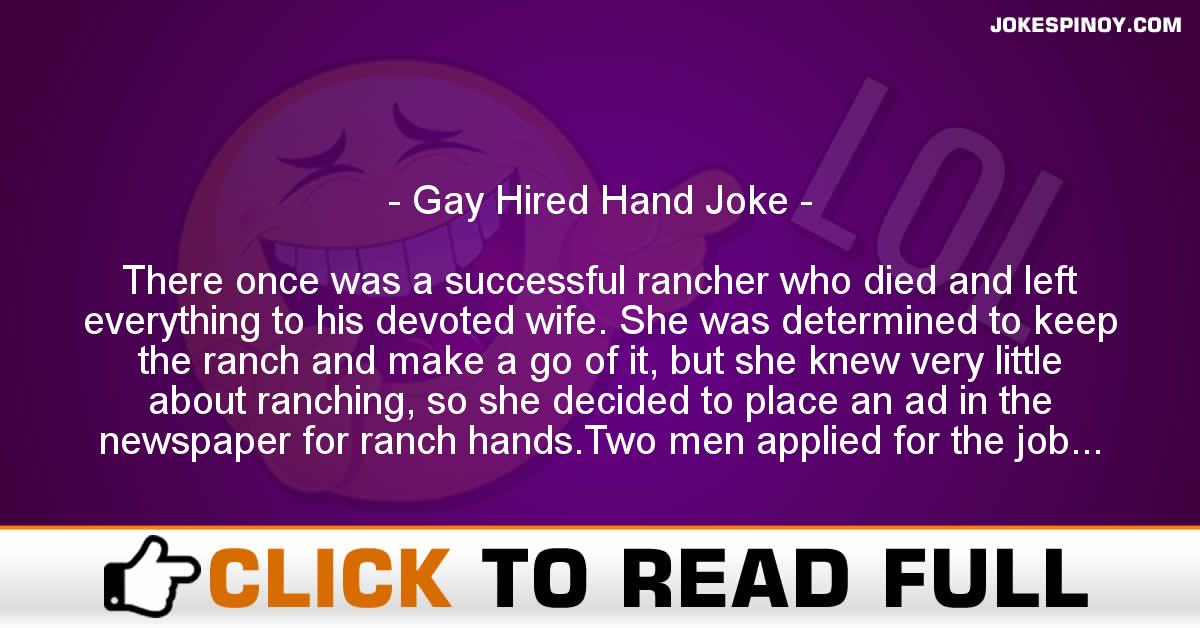 There once was a successful rancher who died and left everything to his devoted wife. She was determined to keep the ranch and make a go of it, but she knew very little about ranching, so she decided to place an ad in the newspaper for ranch hands.Two men applied for the job… One was g*y and the other a drunk. She thought long and hard about it, and when no one else applied, she decided to hire the g*y guy, figuring it would be safer to have him around the house than the drunk.He turned out to be a fantastic worker, worked long hard hours every day and knew a lot about ranching.For weeks the two of them worked, and the ranch was doing really well.Then one day the rancher’s wife said to the hired hand, “You have done a really good job and we’ve both done nothing but work for weeks. The ranch looks great, and I’m taking Saturday night off and going into town to kick up my heels and paint the town red, and I think you should do the same.”The hired hand agreed readily, and Saturday night each went to town. The rancher’s wife had dinner and drinks with friends, and talked and joked and danced, and had a great time, getting home about midnight. The hired hand wasn’t home yet, so she decided to wait up for him.One o’clock and no hired hand yet. Two o’clock and no hired hand and she began to worry. At two-thirty in came the hired hand. The rancher’s wife was sitting by the fireplace and called him over by her. “Now I’m the boss”, she said, “and you have to do what I tell you, right?””Well… yes”, he answered.”Then unbutton my blouse and take it off”, she said. He did as she asked.”Now take off my boots.” He did.”Now take off my socks.” He did.”Now take off my skirt.” He did.”Now take off my bra.” Again he did as she asked.”Now take off my panties.” And again he did what she told him.Then she looked at him and said, “Don’t you ever wear my clothes to town again!”