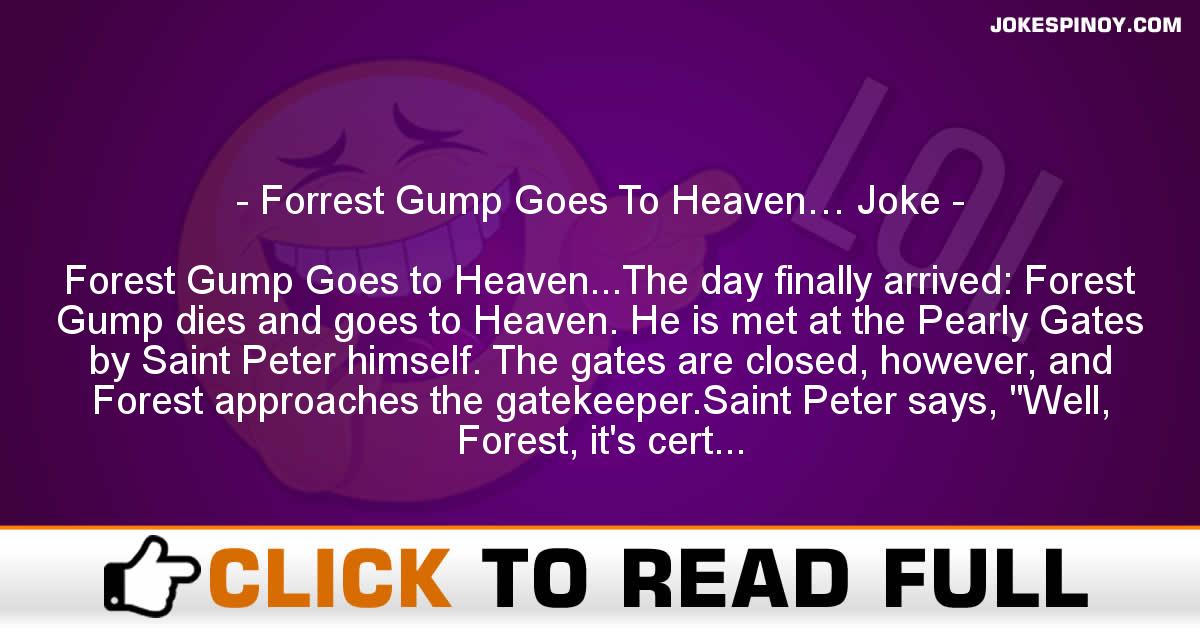 Forest Gump Goes to Heaven…The day finally arrived: Forest Gump dies and goes to Heaven. He is met at the Pearly Gates by Saint Peter himself. The gates are closed, however, and Forest approaches the gatekeeper.Saint Peter says, “Well, Forest, it’s certainly good to see you. We have heard a lot about you.” “I must inform you that the place is filling up fast, and we’ve been administering an entrance examination for everyone. The tests are fairly short, but you need to pass before you can get into Heaven.”Forest responds, “It shore is good to be here Saint Peter. I was looking forward to this.” “Nobody ever told me about any entrance exams. Shore hope the test ain’t too hard; life was a big enough test as it was.”Saint Peter goes on, “Yes, I know Forest.” “But, the test I have for you is only three questions. Here is the first: What days of the week begin with the letter ‘T’?” “Second, how many seconds are there in a year?” “Third, what is God’s first name?”Forest goes away to think the questions over. He returns the next day and goes up to Saint Peter to try to answer the exam questions.Saint Peter waves him up and asks, “Now that you have had a chance to think the questions over, tell me your answers.”Forest says, “Well, the first one, -how many days of the week begin with the letter ‘T’?” “Shucks, that one’s easy; that’d be Today and Tomorrow!” The saint’s eyes open wide and he exclaims, “Forest! That’s not what I was thinking, but … you do have a point though, and I guess I didn’t specify, so I give you credit for that answer.””How about the next one” says Saint Peter, “how many seconds in a year?””Now that one’s harder,” says Forest. “But, I thunk and thunk about that, and I guess the only answer can be twelve.”Astounded, Saint Peter says, “Twelve!” “Twelve!” “Forest, how in Heaven’s name could you come up with twelve seconds in a year?”Forest says, “Shucks, there gotta be twelve: January second, February second, March second…..” “Hold it,” interrupts Saint Peter. “I see where you’re going with it.” “And I guess I see your point, though that wasn’t quite what I had in mind.” “I’ll give you credit for that one too.””Let’s go on with the next and final question,” says Saint Peter, “Can you tell me God’s first name?”Forest says, “Well shore, I know God’s first name.” “Everbody probly knows it.” “It’s Howard.””Howard?” asks Saint Peter. “What makes you think it’s ‘Howard’?”Forest answers, “It’s in the prayer.””The prayer?” asks Saint Peter, “Which prayer?””The Lord’s Prayer,” responds Forest: “Our Father, Howard be thy name….”