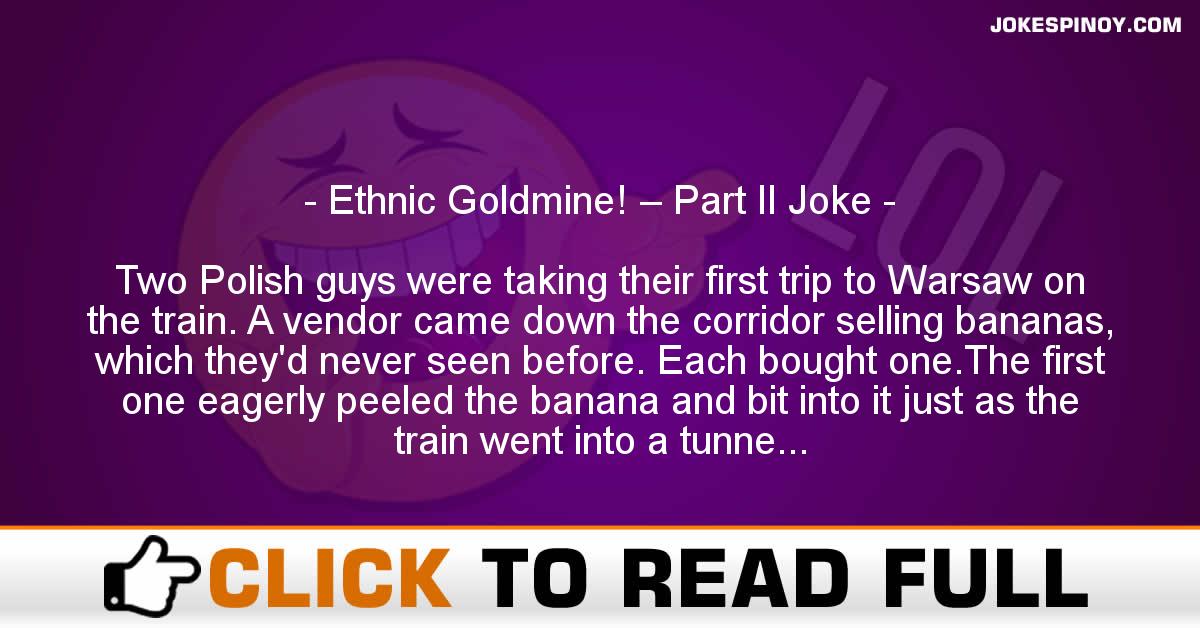 Two Polish guys were taking their first trip to Warsaw on the train. A vendor came down the corridor selling bananas, which they’d never seen before. Each bought one.The first one eagerly peeled the banana and bit into it just as the train went into a tunnel. When the train emerged from the tunnel, he looked across to his friend and said, “I wouldn’t eat that if I were you.””Why not?” “I took one bite and went blind for half a minute!”——————— There were three guys walking together, a Newfie, a Quebecer , and a Vancouver guy. They came across a lantern and a genie popped out.”I will give you each one wish; that’s three wishes in total!” The Newfie said, “I am a fisherman, my dad’s a fisherman, and his dad was a fisherman, and my son will be one too. I want all the oceans full of fish”. Poof! The oceans were full of fish.The Quebecer was amazed! He said, “I want a wall around Quebec, so nothing will get in!” Poof! There was a wall around Quebec.The Vancouver guy said, “Tell me more about this wall.” The genie said, “Well it’s about 150 feet high, 50 feet thick and nothing can get in or out.”So, the Vancouver guy said, “Fill it up with water!”——————— Did You hear about the Redneck who… Spent four days in Sears looking for a miscarriage. Took his expectant wife for the grocery store because they had free delivery. Took a roll of toilet paper to a crap game. Put iodine on his pay check because he got a cut in pay. Was so lazy, he married a pregnant woman. Was feeling so low, he got his face slapped. Lost his girlfriend because he couldn’t remember where he laid her. Thought asphalt was rectal trouble. Thought his typewriter was pregnant because it missed a period. Bought a union suit because his wife was having labor pains. Thought Peter Pan was something to put under the bed. Thought a sanitary belt was a drink from a clean shot gla*s. Smelled good only on the right side, he didn’t know where to buy Left Guard. Studied for five days to take a urine test. Thought Moby Dick was a venereal disease. Went to the outhouse, put one leg in each hole, then crapped his pants.——————— Proof Positive that Jesus was Jewish:1. His Bar Mitzvah was catered.2. He lived at home until he was30.3. He swore his mother was a virgin.4. And his Mother thought he was God.——————— Q: Why do Italians not like Jehovah Witness’? A: They don’t like ANY Witnesses!