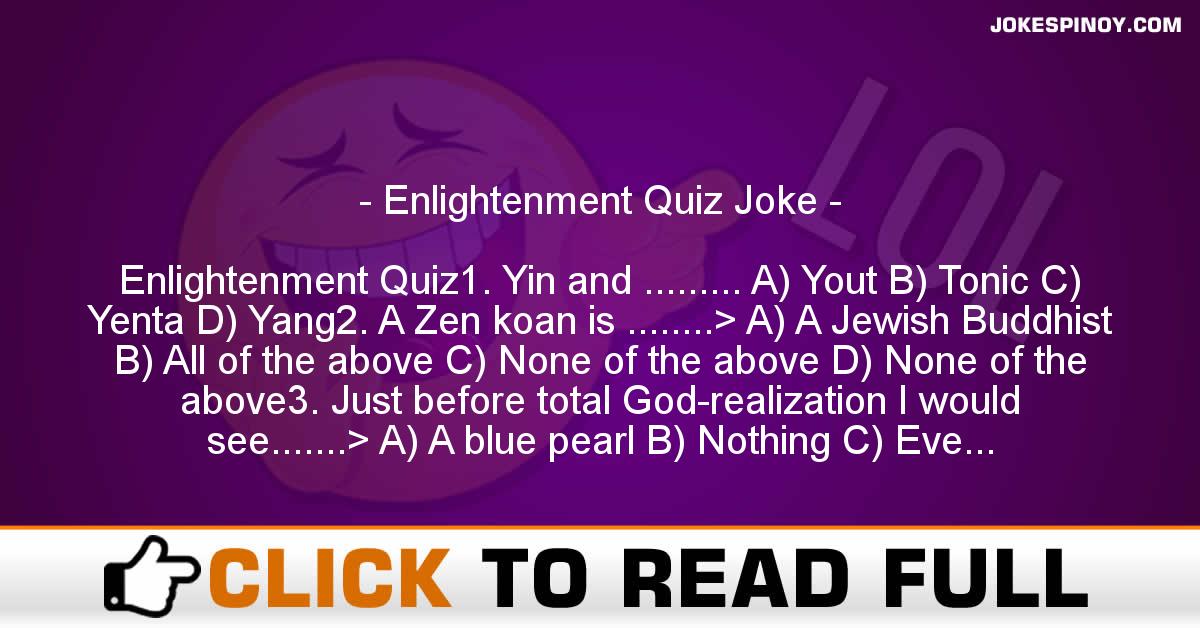 Enlightenment Quiz1. Yin and ……… A) Yout B) Tonic C) Yenta D) Yang2. A Zen koan is ……..> A) A Jewish Buddhist B) All of the above C) None of the above D) None of the above3. Just before total God-realization I would see…….> A) A blue pearl B) Nothing C) Everything D) How would I know?4. Lao-Tsu is……. A) Shrimp with fried rice B) The Atman Brothers C) A Japanese word for sneeze D) Someone you should know about5) Jivatman and Atman merge to become……. A) Jivatmanatman B) The Atman Brothers C) Jivatman & Atman Inc. D) Mr. & Mrs. Atman6) The word or words which best describes the relationship of God, Guru, and Self is:- A) Oneness B) Twoness C) Penpalness D) Just good friends7) Which of the following is not a name of the Lord?> A) Jehova B) Elohim C) Yahweh D) Charlton Heston8) If you swap a Swami with a Yogi you get……. A) A Swogi B) A Salami C) Yogurt D) Heartburn9) Carlos Castaneda is: A) A flamenco dancer B) A resort near San Juan C) A mystery D) The guitarist for Santana10) Om Mani Padme Om means:- A) O Manny, pardon my home B) Money talks, nobody walks in C) If u cn rd ths msg u cn gt a gd jb D) Sanskrit for, Never having to say you’re sorry11) The sound of one hand clapping is: A) Very quiet B) Similar to smiling with one lip C) A Zen record shop D) Like the “p” in swimming12) Linguine is to fettucine as kundalini is to: A) Eenie meenie B) Halloweenie C) Harry Houdini D) Pepto Bismol (this is a silly answer)13) The Tao Te Ching is: A) The new premier of China B) A new record by Cheech and Chong C) I Ching’s older brother D) A fine Chinese restaurant in New York14) You arrive at a party and your host says, “Far out, I want to take the responsibility for creating space in your universe so you can experience your experience.” He means: A) “Have a good time” B) “Don’t eat the Swedish meatballs” C) “I just completed EST training” D) Nothing anyone would understand15) If three devotees can meditate for a total of nine hours, how many devotees would it take to mow the lawn?16) If three devotees can mow the lawn in one hour, how many stoned devotees would it take to meditate until nobody cared?17) If shakti was rising toward the fourth chakra at a rate of3.5 pranayamas per second, and at the same time an energy force was traveling in the opposite direction at a rate of4.8 pranayamas per second, what time would it be in Chicago if we woke up in Los Angeles?True-False_______Ramakrishna is a cereal made with rice and maple flavoring._______Satori is better than nirvana and samadhi except on weekends and holidays._______Sufi dancing is like square dancing only rounder._______The Tibetan Book of the Dead is a novel by Harold Robbins.Score 0-5 points: You are hopelessly attached to the wheel of life and death. Try again next incarnation!6-10 points: You are largely unconscious and stuck in worldly pleasures.10-15 points: You are so-so on the enlightenment scale. Keep reading the New Sun.15-20 points: You are a very conscious being; with a little good karma you could go a long way.20-25 points: You are very close to True Awareness[Where do you find the answer key? AH – that is the REAL test…..]