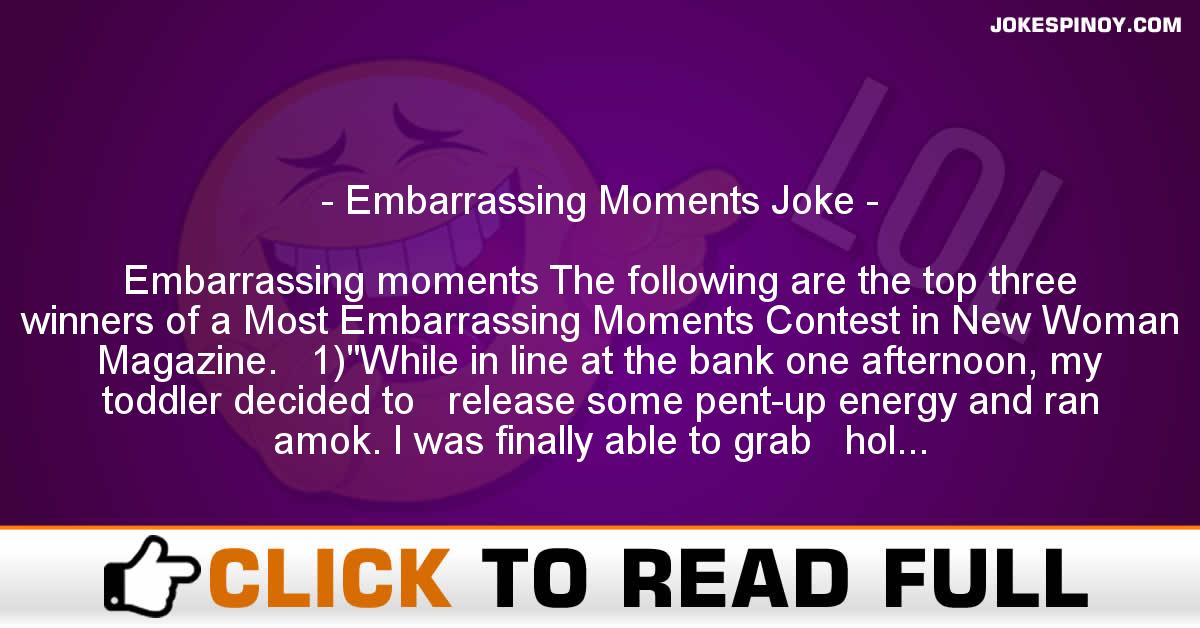 Embarra*sing moments The following are the top three winners of a Most Embarra*sing Moments Contest in New Woman Magazine. 1)”While in line at the bank one afternoon, my toddler decided to release some pent-up energy and ran amok. I was finally able to grab hold of her after receiving looks of disgust and annoyance from other patrons. I told her that if she did not start behaving *right now*, she would be punished. To my horror, she looked me in the eye and said in a voice just as threatening, ‘If you don’t let me go right now, I will tell Grandma that I saw you kissing Daddy’s pee-pee last night!’ “The silence was deafening after this enlightening exchange. Even the tellers stopped what they were doing! I mustered up the last of my dignity and walked out of the bank with my daughter in tow. The last thing I heard when the door closed behind me were screams of laughter” * Amy Richardson; Stafford,Virginia 2)”It was the day before my eighteenth birthday. I was living at home, but my parents had gone out for the evening, so I invited my girlfriend over for a romantic night alone. “As we lay in bed after making love, we heard the telephone ring downstairs. I suggested to my girlfriend that I give her a piggyback ride to the phone. Since we didn’t want to miss the call, we didn’t have time to get dressed. When we got to the bottom of the stairs, the lights suddenly came on and a whole crowd of people yelled, ‘SURPRISE!’ My entire family – aunts, uncles, Grandparents, cousins and all my friends were standing there! My girlfriend and I were frozen in a state of shock and embarra*sment for what seemed like an eternity. “Since then, no one in my family has planned a surprise party again.” * Tim Cahill; Poughkeepsie, New York 3)A lady who picked up several items at a discount store. When she finally got up to the checker, she learned that one of her items had no price tag. Imagine her embarra*sment when the checker got on the intercom and boomed out for all the store to hear: “PRICE CHECK ON LANE THIRTEEN,TAMPAX, SUPERSIZE.” That was bad enough, but somebody at the rear of the store apparently misunderstood the word “tampax” for “THUMBTACKS.” In a business-like tone, a voice boomed back over the intercom: “DO YOU WANT THE KIND YOU PUSH IN WITH YOUR THUMB OR THE KIND YOU POUND IN WITH A HAMMER?”