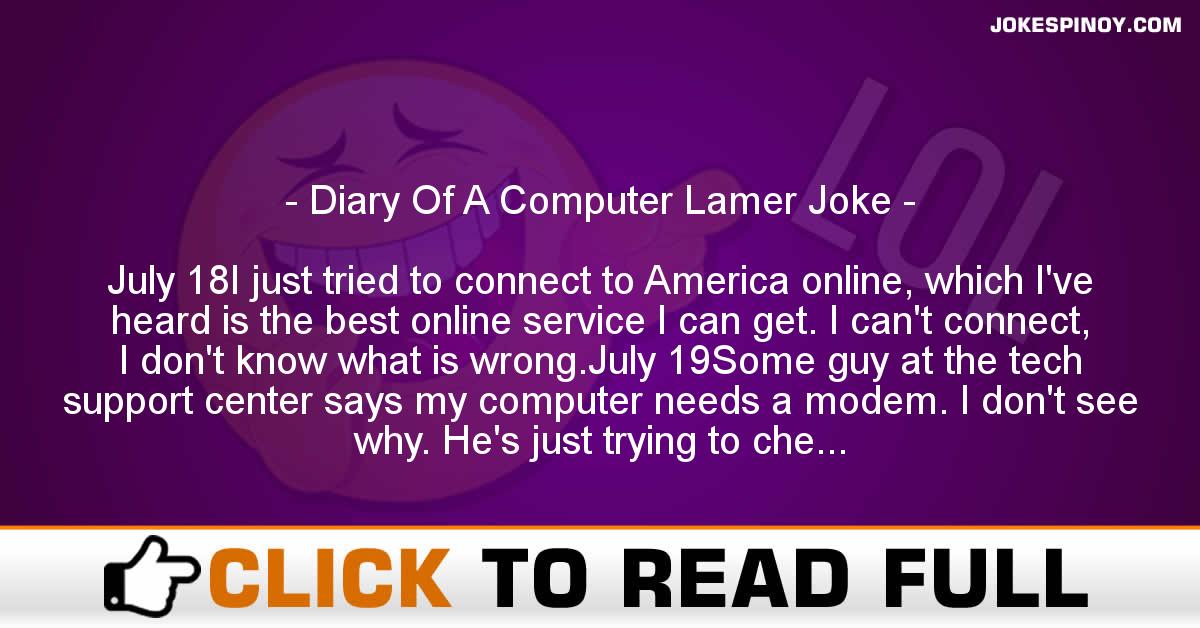 July 18I just tried to connect to America online, which I’ve heard is the best online service I can get. I can’t connect, I don’t know what is wrong.July 19Some guy at the tech support center says my computer needs a modem. I don’t see why. He’s just trying to cheat me. How dumb does he think I am?July 20I bought the modem, I couldn’t figure out where it goes though, it wouldn’t fit in the monitor or the printer. I’m confused.July 21I finally got the modem in and hooked up. A three year old next door did it for me.July 22The three year old kid next door hooked me up to America online for me. He’s so smart.July 23What the heck is the internet? I thought I was on America Online, not this internet thingy. I’m confused.July 24The three year old kid next door showed me how to use this America Online stuff. He must be a genius at least compared to me.July 25I tried to use chat today. I tried to talk into my computer but nothing happened. Maybe I need to buy a microphone.July 26I found this thingy called Usenet. I got out of it because I’m connected to America Online, not Usenet. I went to the doctor today for my regular checkup. He says that since I connected, My brain has mysteriously shrunk to half its normal size.July 27These people in this Usenet thingy keep using capital letters. How do they do that? i never figured out how to type capital letters. Maybe they have a different type of keyboard.July 28I found this thingy called the Usenet oracle. It says that it can answer any questions I ask it. I asked it 44 separate questions about the internet. I hope it responds soon.July 29I found a group called rec.humor. I decided to post this joke about why the chicken crossed the road. To get to the other side! ha ha! I wasn’t sure if i posted it right so I posted it 56 more times.July 30I keep hearing about the World Wide Web. I didn’t know spiders grew that large.July 31The oracle responded to my questions today. Geez, it was rude. I was so angry that I posted an angry message about it to rec.humor.oracle.d. I wasn’t sure if it posted right so I posted it 22 more times.August 1Someone told me to read the FAQ. Geez, they didn’t have to use profanity.August 2I just read this post called make money fast. I’m so exited, I’m going to make lots of money. I followed his instructions and posted it to every newsgroup i could find.August 3I just made my signature file. It’s only 6 pages long, So I will have to work on it some more.August 4I just looked at a group called alt.aol.sucks. I read a few posts and I really believe that aol should be wiped off the face of the Earth. I wonder what an “aol” is, however.August 5I was asking where to find some information about something. Some guy told me to check out ftp.netcom.com. I’ve looked and looked, but I cant find that group.August 6Some guy suspended my account because of what i was doing. I told him I don’t have an account at his bank. He’s so dumb.