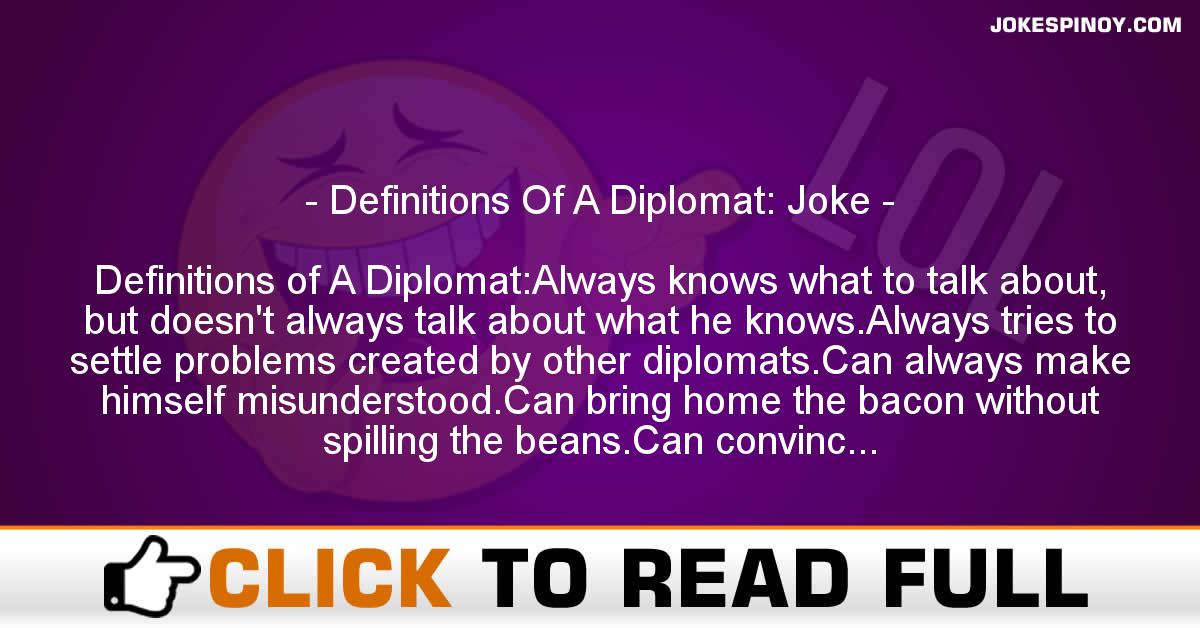 Definitions of A Diplomat:Always knows what to talk about, but doesn’t always talk about what he knows.Always tries to settle problems created by other diplomats.Can always make himself misunderstood.Can bring home the bacon without spilling the beans.Can convince his wife not to hide her nice body under a floor-length sable.Can convince his wife to show off her new coat in a bus rather than in a taxi.Can juggle a hot potato long enough for it to become a cold issue.Can keep his shirt on while getting something off his chest.Can look happy when he has unexpected dinner guests.Can make his wife believe she will look fat in a mink coat.Can make nothing sound like something.Can put his best foot forward when he doesn’t have a leg to stand on.Can put his foot down without stepping on someone’s toes.Can say the nastiest things in the nicest way.Can tell a man he’s open-minded when he means he has a hole in his head.Can tell you to go to hell so tactfully that you look forward to the trip.Comes right out and says what he thinks when he agrees with you.Divides his time between running for office and running for cover.Has a straightforward way of dodging issues.Knows how far to go before he goes too far.Lets you do all the talking while he gets what he wants.Never tells a woman how nice she looks in a gown. He tells her how nice the gown looks on her.Puts his cards on the table, but still has some up each sleeve.Straddles an issue whenever he isn’t dodging one.Will approach every question with an open mouth.Will lay down your life for his country.Will refuse to answer any question on the ground it might eliminate him.