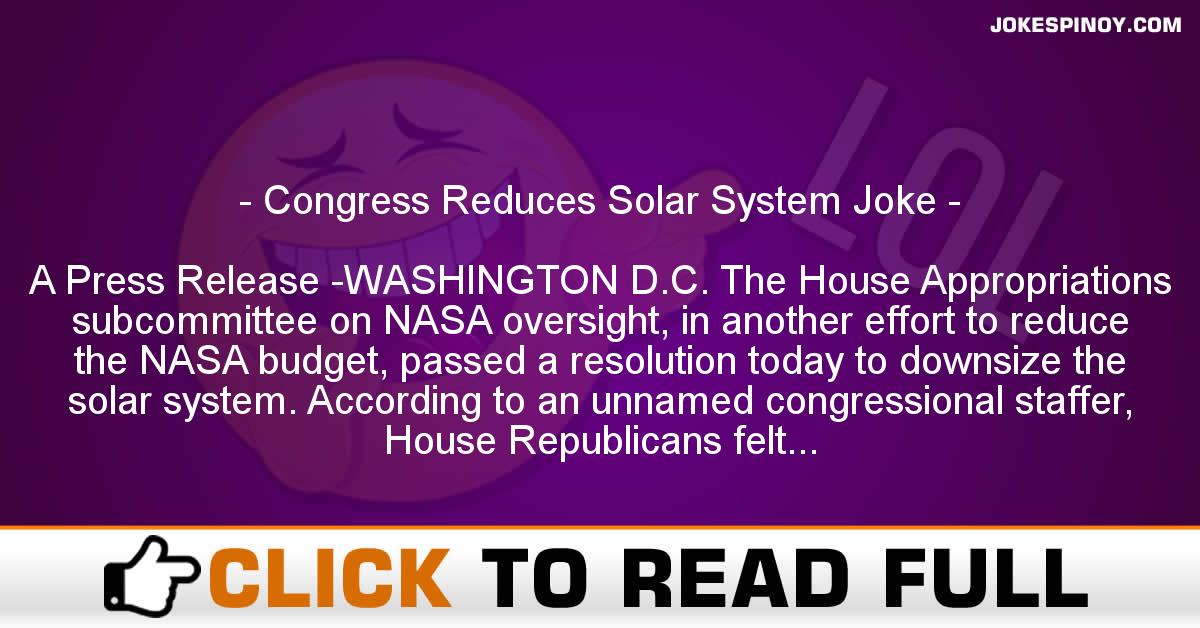 A Press Release -WASHINGTON D.C. The House Appropriations subcommittee on NASA oversight, in another effort to reduce the NASA budget, pa*sed a resolution today to downsize the solar system. According to an unnamed congressional staffer, House Republicans felt there has been “too much redundancy in the solar system” and that streamlining the 4.5 billion year old planetary system is long overdue. Such action would give NASA fewer places to go and this would allow the agency to carry out its space exploration goals within the funding profile that the House proposed earlier this summer.”Look, we have three terrestrial planets” said Congressman Rip U. Apart (R, Del.), “and only one of them really works! So why not get rid of the other two and clean up the neighborhood?” Most subcommittee members felt that while downsizing was definitely in the cards, eliminating both Mars and Venus was going too far. “We have too many international commitments to Mars.” said Rush N. Hater (R, Calif.). “So I think we should keep Mars and dump Venus. Its too hot to live on, and liberal Democrats keep using it as an example of what global warming can do. So from a political and practical point of view, Venus has got to go.”Also at risk is the planet Mercury which lacks support because of its small size and poor visibility from Earth. “Who needs it?” asked Congressman Newt Onian (R, N.C.). “Have you ever seen it? I haven’t. So what good is it? We just don’t need useless planets. And speaking of useless planets, what about the asteroids? If you’ve seen one, you’ve seen them all. So I say we ought to get rid of the little boogers once and for all.”However, the downsizing recommendations do not stop with the terrestrial planets. The resolution also calls for a reduction in the number of gas giants which contain most of the planetary ma*s in the solar system. Most subcommittee members favor retaining Jupiter and Saturn, and eliminating Uranus and Neptune. “Jupiter employs the most molecules, and Saturn has those pretty little rings everyone likes.” said Rep. Con Mann (R, Fla.). “On the other hand, Uranus is a bore and its rings are dirty. And Neptune, for God’s sake, is just too far away. So begone with those ugly bruisers.”But the influential Wright I.M. Fornow from South Carolina has publicly announced he will fight to eliminate Saturn. Fornow is especially miffed by NASA’s success thus far in keeping Ca*sini, the next mission to Saturn, alive which he feels is waste of taxpayers money. “If there ain’t no Saturn, then there ain’t no Ca*sini” he exclaimed. The congressman also expressed concern about sending back-to-back spacecraft bearing Italian surnames to the outer planets (The Galileo spacecraft arrives at Jupiter this December).The subcommittee was unanimous in its views towards Pluto which they deemed a moral misfit. “Now here’s a planet we can definitely do without.” continued Fornow. “A few years ago, it was farthest from the sun. Now its not. Its just too confusing. And now they tell me its really two planets instead of one. What the hell is going on here?”The resolution must now be presented to the entire House, where it is expected to pa*s easily since only a minority of Representatives have constituents on the affected planets. NASA Administrator Golden has vowed to resist any further reductions to the solar system, saying that “NASA has expended considerable effort to make the planets cheaper, faster, and better. Much of this work would be wasted if the solar system were downsized” stated Golden.Critics say, however, that reducing the number of planets will not produce the expected savings to taxpayers. Textbooks, they note, would have to be revised to reflect the new arrangement, and facilities would need to be constructed to remove the planets themselves. The resolution is also likely to draw strong opposition from religious fundamentalists who have long opposed the elimination of any of the biblical planets. Thus, the matter is far from resolved.