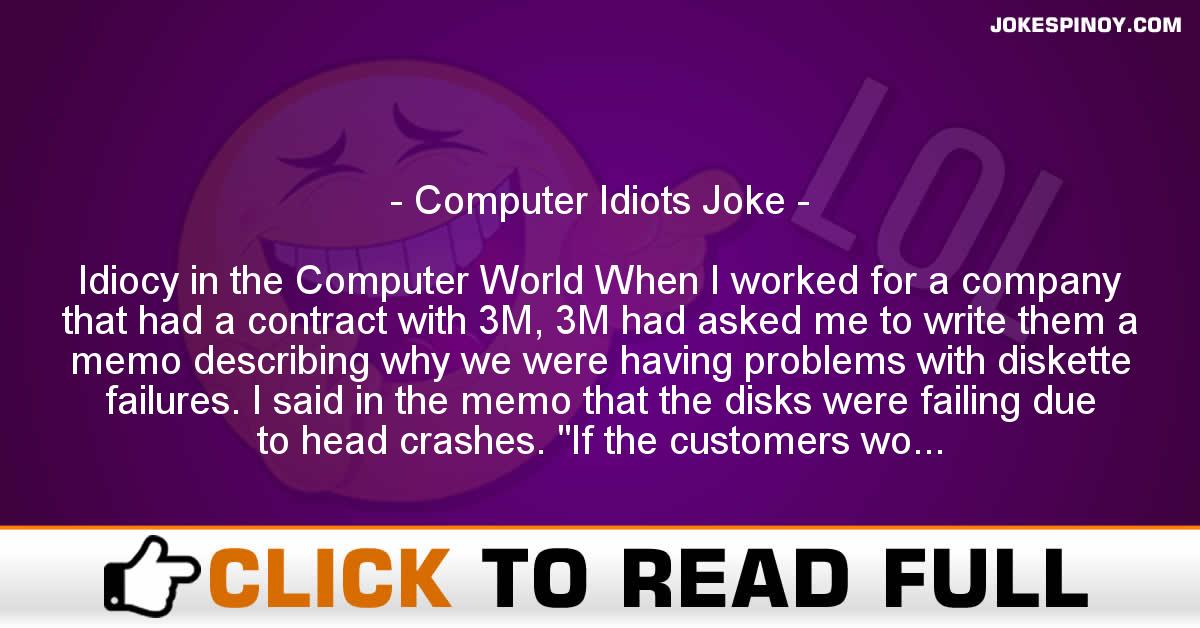 Idiocy in the Computer World When I worked for a company that had a contract with 3M, 3M had asked me to write them a memo describing why we were having problems with diskette failures. I said in the memo that the disks were failing due to head crashes. “If the customers would just clean their heads periodically, we wouldn’t have these problems,” I said in the memo. One customer responded with “What kind of shampoo do you recommend?”An end-user hotline received a call about a bad software disk. They asked the customer to make a copy of the disk and mail it in to the hotline. A few days later, they received a letter with a mimeographed copy of the disk. Since it was a double-sided disk, both sides of the disk had been Xeroxed.A Computer Operator says as she is lifting an RP06 disk pack from the drive: “Gee, how much does one of these weigh?”Me: “It depends on how much data is on the disk.The operator believed it.I had a similar experience while working as a student operator at Michigan Tech. One particularly trying afternoon, the computer was merrily crashing for a number of reasons. After about four such spectacles, we broadcast that the computer would be down for the remainder of the afternoon. There was a resigned groan from the users and they began to file out of the Center, except for one comely young woman with wide blue eyes who wandered up to the counter and queried: “What’s wrong with the computer?”Too tired and irritated to give her a straight answer, I looked her straight in the eye and replied: “Broken muffler belt.”A look of deep concern wafted into her expression as she asked: “Oh, that’s bad. Can you call Midas?”A few excerpts from the Computer Help Desk:Caller: “What’s the name for when you’re entering data into the computer?”HD: “Data Entry.”Caller: “Thank you!”Overheard in a student computer lab:Client (raising hand and waving frantically): “The computer says ‘Enter your name and press RETURN. ‘What do I do??”Lab Assistant: “Enter your name and press RETURN.”Client (as if a revelation has struck): “Oh!”