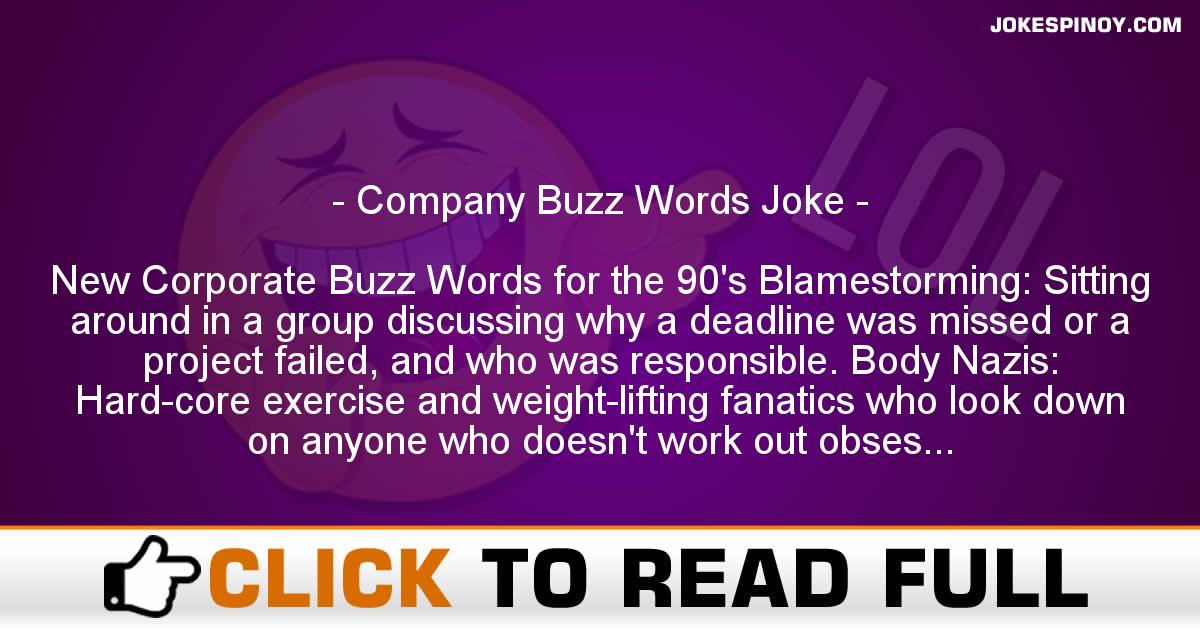 New Corporate Buzz Words for the 90’s Blamestorming: Sitting around in a group discussing why a deadline was missed or a project failed, and who was responsible. Body Nazis: Hard-core exercise and weight-lifting fanatics who look down on anyone who doesn’t work out obsessively. Seagull Manager: A manager who flies in, makes a lot of noise, and then leaves. Chainsaw Consultant: An outside expert brought in to reduce the employee headcount, leaving the top bra*s with clean hands. Cube Farm: An office filled with cubicles. Idea Hamsters: People who always seem to have their idea generators running. Mouse Potato: The online, wired generation’s answer to the couch potato. Prairie Dogging: When someone yells or drops something loudly in a cube farm, and people’s heads pop up over the walls to see what’s going on. SITCOMs: What yuppies turn into when they have children and one of them stops working to stay home with the kids. Stands for Single Income, Two Children, Oppressive Mortgage. Squirt the Bird: To transmit a signal to a satellite. Starter Marriage: A short-lived first marriage that ends in divorce with no kids, no property, and no regrets. Stress Puppy: A person who seems to thrive on being stressed out and whiny. Swiped Out: An ATM or credit card that has been rendered useless because the magnetic strip is worn away from extensive use. Tourists: People who take training cla*ses just to get a vacation from their jobs. “We had three serious students in cla*s; the rest were just tourists.” Treeware: Hacker slang for documentation or other printed material. Xerox Subsidy: Euphemism for swiping free photocopies from one’s workplace. Going Postal: Euphemism for being totally stressed out, for losing it. Makes reference to the unfortunate track record of postal employees who have snapped and gone on shooting rampages. Alpha Geek: The most knowledgeable, technically proficient person in an office or work group. “Ask Larry, he’s the Alpha Geek around here. A*smosis: The process by which some people seem to absorb success and advancement by kissing up to the boss rather than working hard. Chips and Salsa: Chips = hardware, Salsa = software. “Well, first we gotta figure out if the problem is in your chips or your salsa.” Flight Risk: Used to describe employees who are suspected of planning to leave a company or department soon. GOOD job: A “Get-Out-Of-Debt” job. A well-paying job people take in order to pay off their debts, one that they will quit as soon as they are solvent again. Irritainment: Entertainment and media spectacles that are annoying, but you find yourself unable to stop watching them. The O.J. trials were a prime example. Percussive Maintenance: The fine art of attacking an electronic device to get it to work again. Uninstalled: Euphemism for being fired. Heard on the voicemail of a Vice President at a downsizing computer firm: “You have reached the number of an uninstalled Vice President. Please dial our main number and ask the operator for a*sistance.” See also Decruitment. Vulcan Nerve Pinch: The taxing hand positions required to reach all the appropriate keys for commands. For instance, the warm re-boot for a Mac II computer involves simultaneously pressing the Control Key, the Command key, the Return key and the Power On key.