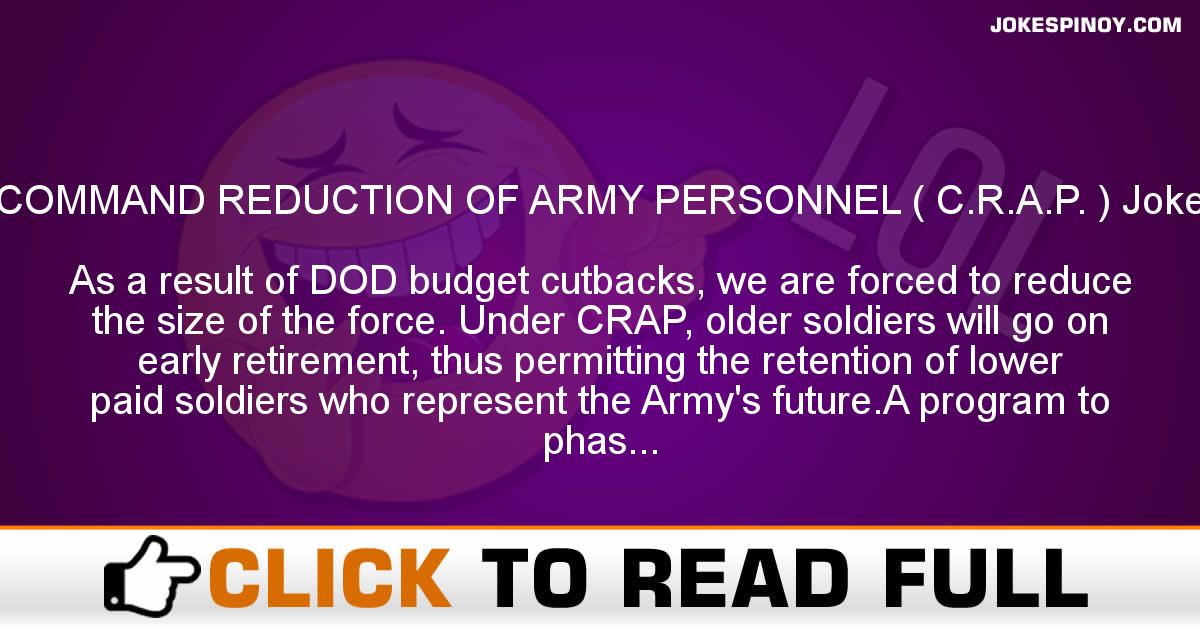 As a result of DOD budget cutbacks, we are forced to reduce the size of the force. Under CRAP, older soldiers will go on early retirement, thus permitting the retention of lower paid soldiers who represent the Army’s future.A program to phase out older soldiers via retirement by the end of the current fiscal year will be placed in effect. the program will be known as Retire Active Personnel Early (RAPE).Employees who are RAPEd will be given the opportunity to seek civilian employment within the Department of the Army. To that end, RAPEd soldiers will be required to fill out numerous DA Forms (currently in the development, test, and evaluation stage) detailing their education and experience.This phase does not guarantee retired soldiers a civil service position; it does, however, guarantee that the soldier’s unique capabilities will be considered before being bypa*sed in the hiring process. This phase of CRAP is known as Survey of Capabilities of Retired Warriors (SCREW).Soldiers who have been RAPEd and SCREWed may request review of their situation by higher authority. This is the Study by Higher Authority Following Termination (SHAFT)phase.CRAP policy dictates that a soldier may be RAPEd once, SCREWed twice, but may be SHAFTed as many times as the Army leadership deems appropriate.If a soldier follows the above procedures, he or she will be entitled to get Half Earnings for Retired Personnel Early Severance (HERPES). As HERPES is considered a benefit payment, any soldier who gets HERPES will no longer be RAPEd or SCREWed by the Army.The Army leadership wishes to a*sure younger soldiers who remain on active duty that the Army will continue its policy of ensuring that soldiers are well trained through our Special High Intensity Training (SHIT) program. The Army takes pride in the amount of SHIT our soldiers receive and can boast that it gives its soldiers more SHIT than any other service.If a soldier feels he or she does not get enough SHIT, see your commander.