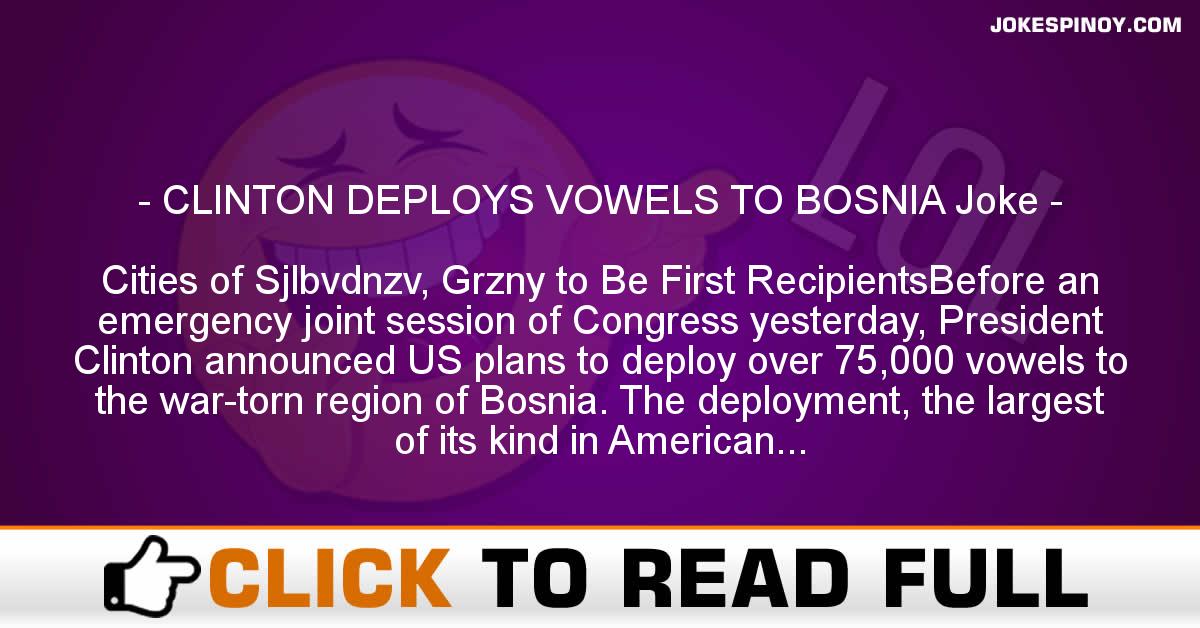 Cities of Sjlbvdnzv, Grzny to Be First RecipientsBefore an emergency joint session of Congress yesterday, President Clinton announced US plans to deploy over 75,000 vowels to the war-torn region of Bosnia. The deployment, the largest of its kind in American history, will provide the region with the critically needed letters A,E,I,O and U, and is hoped to render countless Bosnian names more pronounceable.”For six years, we have stood by while names like Ygrjvslhv and Tzlynhr and Glrm have been horribly butchered by millions around the world,” Clinton said. “Today, the United States must finally stand up and say `Enough.’ It is time the people of Bosnia finally had some vowels in their incomprehensible words. The US is proud to lead the crusade in this noble endeavour.”The deployment, dubbed Operation Vowel Movement by the State Department, is set for early next week, with the Adriatic port cities of Sjlbvdnzv and Grzny slated to be the first recipients. Two C-130 transport planes, each carrying over 500 24-count boxes of “E’s,” will fly from Andrews Air Force Base across the Atlantic and airdrop the letters over the cities. Citizens of Grzny and Sjlbvdnzv eagerly await the arrival of the vowels.”My God, I do not think we can last another day,” Trszg Grzdnjkln, 44, said. “I have six children and none of them has a name that is understandable to me or to anyone else. Mr. Clinton, please send my poor, wretched family just one `E.’ Please.” Said Sjlbvdnzv resident Grg Hmphrs, 67: “With just a few key letters, I could be George Humphries. This is my dream.”The airdrop represents the largest deployment of any letter to a foreign country since 1984. During the summer of that year, the US shipped 92,000 consonants to Ethiopia, providing cities like Ouaouoaua, Eaoiiuae, and Aao with vital, life-giving supplies of L’s, S’s and T’s.