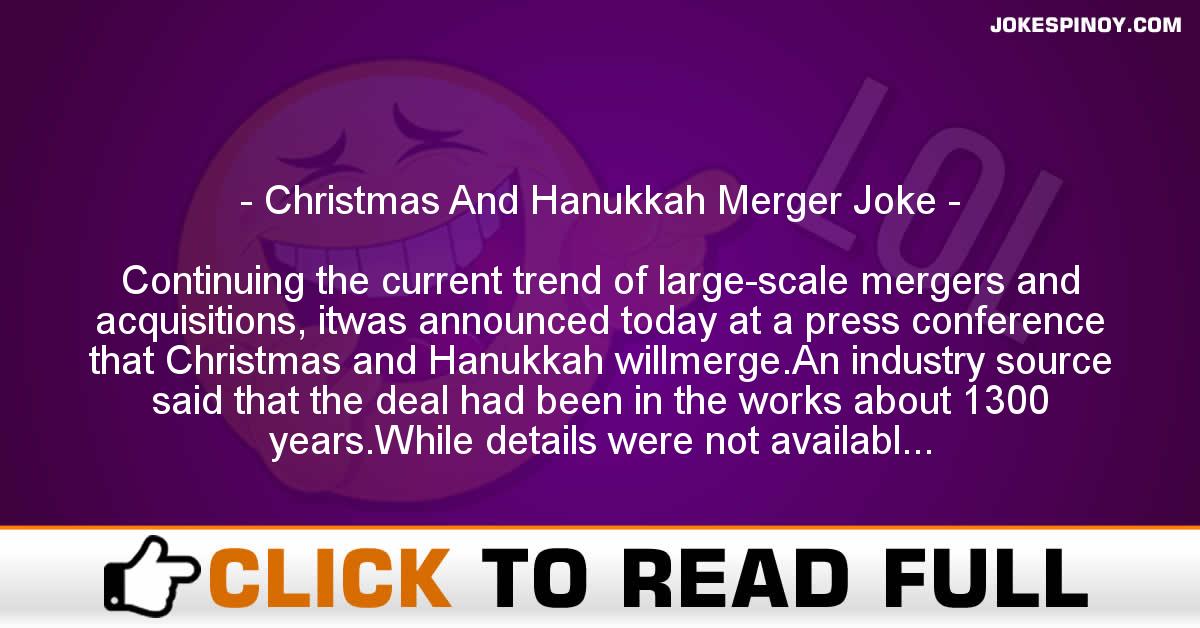 Continuing the current trend of large-scale mergers and acquisitions, itwas announced today at a press conference that Christmas and Hanukkah willmerge.An industry source said that the deal had been in the works about 1300 years.While details were not available at press time, it is believed that theoverhead cost of having twelve days of Christmas and eight days of Hanukkah was becoming prohibitive for both sides. By combining forces, we’re told, the world will be able to enjoy consistently high-quality service during the Fifteen Days of Chrismukah, as the new holiday is being called.Ma*sive layoffs are expected, with lords a-leaping and maids a-milkingbeing the hardest hit.As part of the conditions of the agreement, the letters on the dreydl,currently in Hebrew, will be replaced by Latin, thus becoming unintelligible to a wider audience.Also, instead of translating to “A great miracle happened there,” themessage on the dreydl will be the more generic “Miraculous stuff happens.”In exchange, it is believed that Jews will be allowed to use Santa Clausand his vast merchandising resources for buying and delivering their gifts.One of the sticking points holding up the agreement for at least threehundred years was the question of whether Jewish children could leave milk and cookies for Santa even after having eaten meat for dinner. Abreakthrough came last year, when Oreos were finally declared to be Kosher. All sides appeared happy about this.Fortunately for all concerned, he said, Kwanzaa will help to maintain thecompet**ive balance. He then closed the press conference by leading allpresent in a rousing rendition of “Oy Vey, All Ye Faithful.”