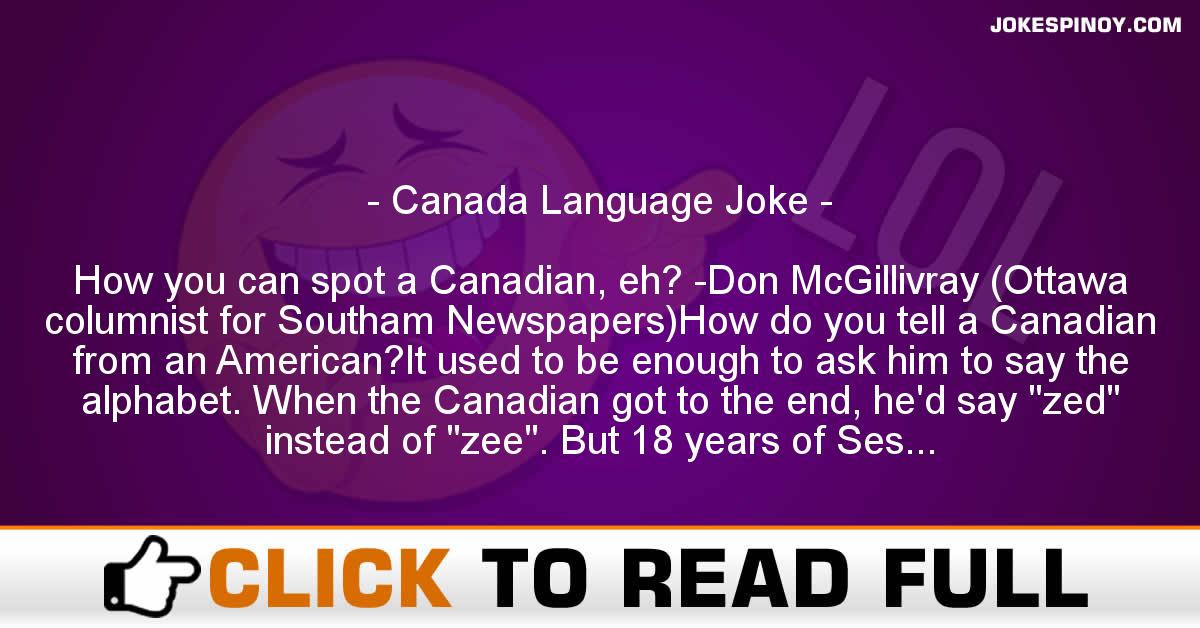 How you can spot a Canadian, eh? -Don McGillivray (Ottawa columnist for Southam Newspapers)How do you tell a Canadian from an American?It used to be enough to ask him to say the alphabet. When the Canadian got to the end, he’d say “zed” instead of “zee”. But 18 years of Sesame Street have taught a lot of Canadian kids to say “zee,” and it’s starting to sound as natural as it does south of the 49th parallel.Another test used to be the word “lieutenant”. Canadians pronounced it in the British was, “leftenant”, while Americans say “lootenant”. But American cop shows and army shows and movies have eroded that difference, too.Canadians have been adopting American spelling as well. They used to put a “u” in words like labour. The main organization in the country, the equivalent of the AFL-CIO, is still officially called the Canadian Labour Congress. But news organizations have been wiping out that distinction by adopting American spelling, mostly to make it easier to use news copy from such agencies as Associated Press without a lot of changes. So it’s “Canadian Labor Congress” when the Canadian Press, the national news agency, writes about it.Some pronunciations, considered true tests of Canadians, are not as reliable as they’re thought. Take the word “house” for example. When some Canadians say it, it sounds very Scottish in American ears. Visiting Americans trying to reproduce what they hear usually give the Canadian pronunciation as “hoose”.The same for “out” and “about”. The way some Canadians say them sounds like “oot” and “aboot” to many Americans. And when an American says “house” to a Canadian, the Canadian often hears a bit of an “ay” in it, something like “hayouse”.But pronunctiaiton isn’t a good test because people from different parts of Canada speak differently. A resident of the Western province of Alberta, where there has been a considerable inflow of settlers from the United States, may sound like a Montanan or a Dakotan.Then there’s the ubiquitous Canadian expression “eh?” – pronounced “ay?” This is a better test because many Canadians tack it on to the end of every assertion to turn it into a question.