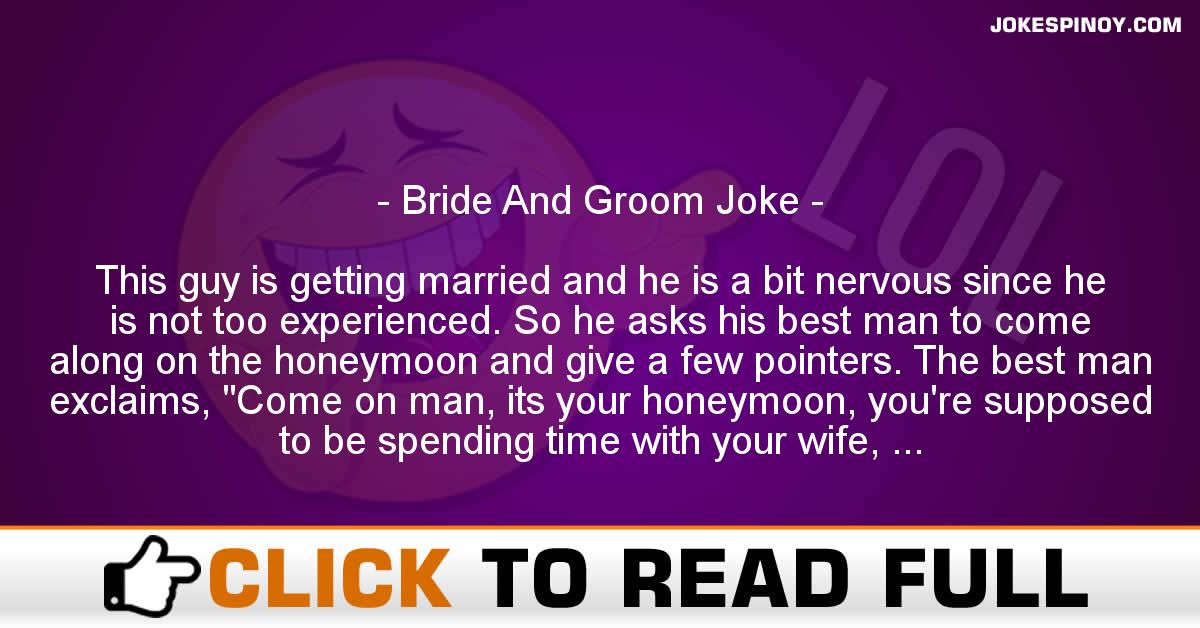 This guy is getting married and he is a bit nervous since he is not too experienced. So he asks his best man to come along on the honeymoon and give a few pointers. The best man exclaims, “Come on man, its your honeymoon, you’re supposed to be spending time with your wife, not your best friend!” To which the groom replies that he has already paid for a room next door to his for the best man. After much coercion, the best man give in and decides to go along. They work out a system where the best man will pound on the wall and shout advice if he hears anything going wrong.So the honeymoon comes and goes, and the bride and groom go to the honeymoon suite of the hotel, and the best man goes to his room next door. After a few moments, the bride gets undressed, but the groom gets so nervous he runs into the bathroom and locks the door. After about five minutes of waiting, the bride says, “honey, are you coming out, I have to go to the bathroom!”The groom replies, “I will be out in a few minutes, hon, I’ll be ready soon.”After a few more minutes, the bride can’t wait any longer, so she rummages under the bed where all the wedding gifts are stashed, grabs a box, unwraps it, pulls out the fondue pot, shits in it, wipes with the tissue paper, closes it and shoves it under the bed. Just then the groom, having summoned his manly nerve walks out of the bathroom. The bride, being feminine and all, goes into the bathroom to stall for a few minutes so the groom won’t know what she did.The groom, sitting on the bed =sniff* notices this awful smell!*sniff* *sniff* Ewwwwwwwwwwwwww!!!! *sniff* What can that be? He looks under the bed, finds the box, pulls it out and exclaims, “Honey, there’s shit in your box!!!”Boom! Boom! Boom! (There’s pounding on the wall…) The best man yells from the other room, “Turn her over, turn her over!”