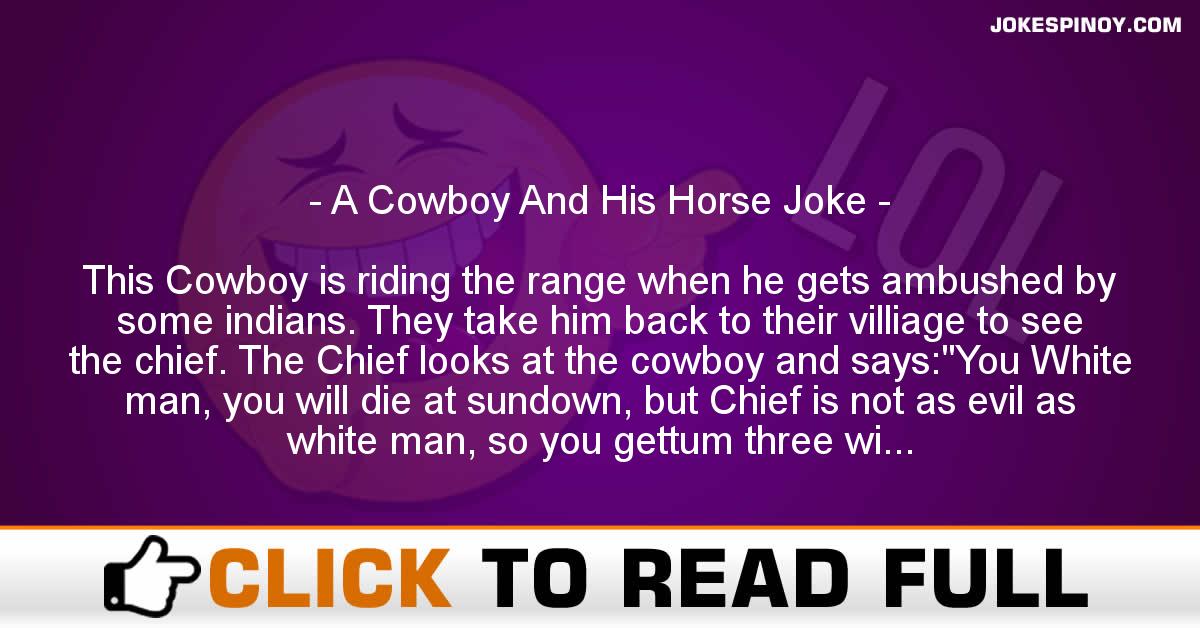 This Cowboy is riding the range when he gets ambushed by some indians. They take him back to their villiage to see the chief. The Chief looks at the cowboy and says:”You White man, you will die at sundown, but Chief is not as evil as white man, so you gettum three wishes.” What is your first wish?, The cowboy looks around, thinks, then, with a gulp, say: “well, can i talk to my horse o’ great chief?”The Chief looks puzzled, laughs to his tribe and says “he-he, sure white man you can talk to your horse”. So the cowboy goes to his horse and wispers in it’s ear, the horse looks puzzled, but then with bright eyes it gallops off in a cloud of dust. The Indians just sit and laugh at the cowboy for wasting his wish. BUT, all of a sudden the horse returns with a Blonde riding upon its back. The indians look amazed. The chief grins, points to a secluded Teepee. The cowboy now looks embarra*sed, so he takes the blonde and goes into the teepee. An hour later he comes out and says, “Chief, can i talk to my horse again”? The chief says sure, but that be wish number two. Ok says the cowboy.The cowboys goes to the horse and once again wispers into it’s ear, and with a gallop the horse is off!… 15 minutes later, the horse returns, this time having a Brunnette aboard. Once again the cowboy is shown the secluded teepee.An hour later the cowboy comes out, obivously tired now, with only a few hours left before sundown. He looks to the chief, and before he says a word, the chief grins and says “Sure crazy white man you can talk to your horse..”So the cowboy goes to the horse and GRABS him by the ear and yells”LET ME GET THIS STRAIGHT,…I SAID – GO GET A POSSE!!!”