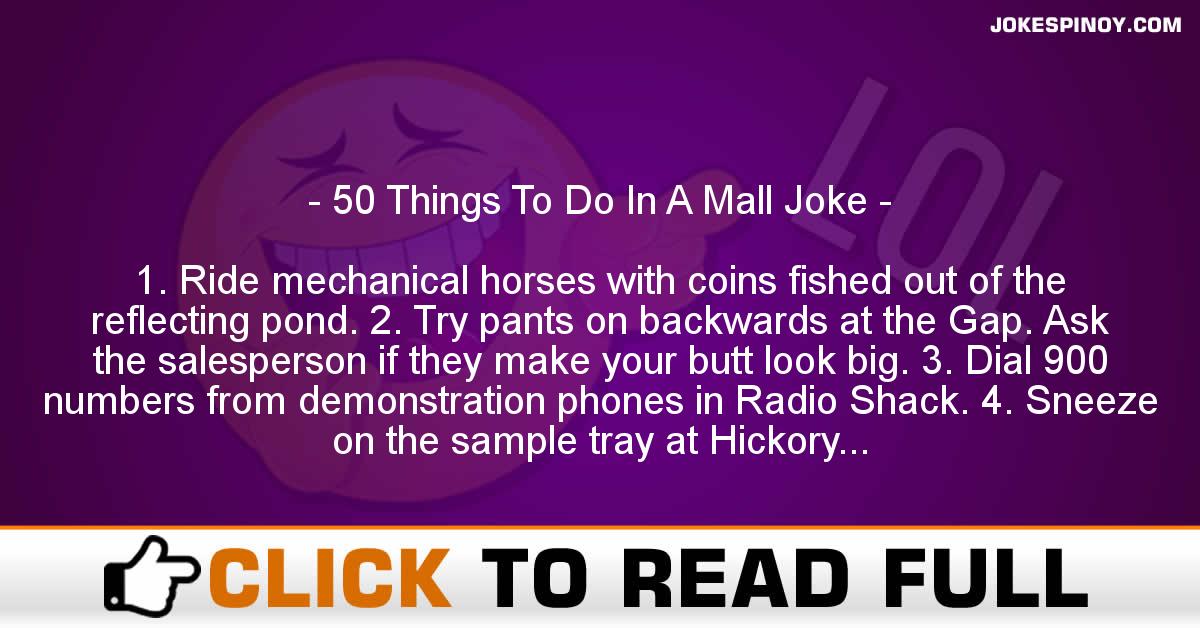 1. Ride mechanical horses with coins fished out of the reflecting pond. 2. Try pants on backwards at the Gap. Ask the salesperson if they make your butt look big. 3. Dial 900 numbers from demonstration phones in Radio Shack. 4. Sneeze on the sample tray at Hickory Farms and helpfully volunteer to consume its now unwanted contents. 5. At the bottom of an escalator, scream ‘MY SHOELACES! AAAGH!’ 6. Ask the sales personnel at the music store whether inflated CD prices are in pesos or rubles. 7. Teach pet store parrots new vocabulary that makes them unsalable. 8. Stomp on ketchup packets at Burger King.. 9. ..but save a few to slurp on as snacks. Tell people that they’re ‘astronaut food’. 10. Follow patrons of B. Dalton’s around while reading aloud from ‘Dianetics.’ 11. Ask mall cops for stories of World War I. 12. Ask a salesman why a particular TV is labeled black and white and insist that it’s a color set. When he disagrees, give him a strange look and say, ‘You mean you really can’t see it?’ 13. Construct a new porch deck in the tool department of Sears. 14. Wear pancake makeup and new clothes and pose as a fashion dummy in clothes departments, occasionally screaming without warning. 15. Test mattresses in your pajamas. 16. Ask the tobaccanist if his hovercraft is full of eels. 17. If you’re patient, stare intently into a surveillance camera for an hour while rocking from side to side. 18. Sprint up the down escalator. 19. Stare at static on a display TV and challenge other shoppers whether they, too, can see the ‘hidden picture’. 20. Ask appliance personnel if they have any TVs that play only in Spanish. 21. Make unusual requests at the Piercing Pagoda. 22. Ask a salesperson in the hardware department how well a particular saw cuts through bone. 23. At the pet store, ask if they have bulk discounts on gerbils, and whether there’s much meat on them. 24. Hula dance by the demonstration air conditioner. 25. Ask for red-tinted lenses at the optometrist. 26. Sneak up on saleswomen at the perfume counter and spray *them* with your own bottle of Eau de Swane. 27. Rummage through the jelly bean bin at the candy store, insisting that you lost a contact lens. 28. Ask a saleswoman whether a particular shade of panties matches the color of your beard. 29. In the changing rooms, announce in a singsong voice, ‘I see London, I see France..’ 30. Leave on the plastic string connecting a new pair of s***s, and wander around the mall taking two-inch steps. 31. Play the tuba for change. 32. Ask the Hammond organ dealer if he can play ‘Jesus Built My Hotrod’. 33. Record belches on electronic sampling keyboards, and perform gastric versions of Jingle Bells for admiring onlookers. 34. Ask the pharmacist at the drugstore which leading cold remedy will ‘give you a really wicked buzz’. 35. Ask the personnel at Pier 1 Imports whether they have ‘any giant crap made out of straw’. 36. ‘Toast’ plastic gag hot dogs in front of the fake fireplace display. 37. Collect stacks of paint brochures and hand them out as religious tracts. 38. Ask the information desk for a stroller, and someone to push you around in it. 39. Change every TV in the electronics department to a station showing ‘Saved by the Bell’. Chant the dialogue in a robotic voice, and scream if anyone tries to switch channels on one of the sets. 40. Hang out in the waterbed section of the furniture department wearing a Navy uniform. Occasionally run around in circles yelling ‘scratch one flattop!’ 41. Hand a stack of pants back to the changing room attendant and scornfully announce that none of them are ‘leakproof’. 42. ‘Play’ the demo modes of video games at the arcade. Make lots of explosion noises. 43. Stand transfixed in front of a mirror bobbing your head up and down. 44. Pay for all your purchases with two-dollar bills to provoke arguments over whether they’re real. 45. If it’s Christmas, ask the mall Santa to sit on *your* lap. 46. Answer any unattended service phones that ring in department stores and say ‘Domino’s.’ 47. Try on flea collars at the pet store while occasionally pausing to scratch yourself. 48. At the stylist, ask to have the hair on your back permed. 49. Show people your driver’s license and demand to know ‘whether they’ve seen this man.’ 50. Buy a jawbreaker from the candy store. Return fifteen minutes later, fish it out of your mouth, and demand to know why it hasn’t turned blue yet.